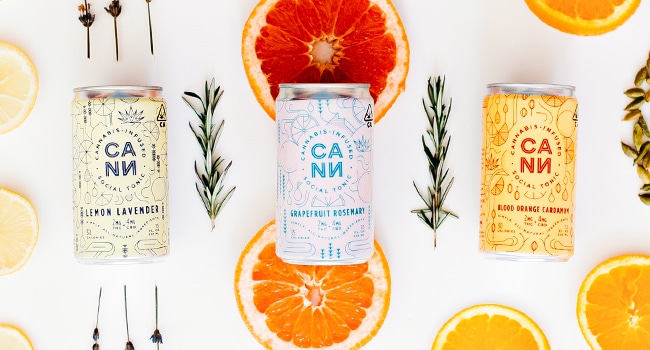 Cannabis-infused “social elixir” Cann has closed a $5 million seed round of financing led by Imaginary and JM10 Partners, the company announced yesterday.

Navy Capital, Global Founders Capital and Cresco Capital also participated in this round, as did undisclosed “key strategic investors,” according to a press release.

Los Angeles-based Cann, winner of BevNET’s New Beverage Showdown 17 last year, is positioned as a better-for-you alternative to alcohol for social consumption occasions. All three flavors — Lemon Lavender, Blood Orange Cardamom and Grapefruit Rosemary — contain 30 calories, 2 mg of THC and 4 mg of CBD per 8 oz. can. The brand is currently sold in over 75 licensed cannabis dispensaries throughout California.

“We have been tracking the new generation of consumers who are searching for and embracing new forms of responsible social drinking which do not involve alcohol,” said Natalie Massenet, co-founder of Imaginary, in a press release. “Cann, with its formulation that has the potency of a light beer without the alcohol or calories, addresses this growing trend in a brilliantly formulated series of beverages.”

“Cann is unique in that its flavor profiles, ingredient purity and smokeless format sets the brand apart not only within the cannabis space, but also the beverage industry as a whole,” he said.

Speaking with BevNET last week, Cann co-founders Luke Anderson and Jake Bullock said having the two co-lead investors on board will provide their brand with a balance of traditional CPG and cannabis-specific expertise. This is the first investment in cannabis for New York-based Imaginary, founded by Nick Brown and Natalie Massenet in 2017, which has backed a variety of CPG and technology companies, including functional beverage brand Dirty Lemon and direct-to-consumer frozen food maker Daily Harvest. Meanwhile, JM10 Partners’ investment portfolio features emerging cannabis industry leaders such as Bloom Farms and Ascend.

“The way we think about it is one foot in, one foot out,” said Bullock. “We love this idea of having Imaginary, which is this incredibly well-respected direct-to-consumer brand investment firm, married with JM10 and their relationship with Ascend, which is one of the best multi-state operators in cannabis. That marriage of real expertise on consumer [products] to cannabis-specific resources has really been underlying our strategy.”

As the novelty of legal cannabis beverages begins to wear off, Anderson added, Cann is aiming to broaden the way consumers interpret the product’s core offering of a microdosed THC drink.

“By partnering with someone like Imaginary on the consumer side, we can avoid being distracted by some of the volatility on the cannabis channel,” he said. “That was the intent — to break out of the confines of the marijuana industry and to think more like a consumer brand.”

Through its relationship with Ascend, a vertically integrated cannabis operator with assets in four states currently, Anderson and Bullock said Cann plans to expand availability into new legal adult-use states throughout this year. Beyond new distribution, the brand is also developing product innovations, starting with a no added sugar version that will debut later this month. Anderson said Cann is exploring working with other functional ingredients, including caffeine, and larger and smaller size formats. Starting in February, the suggested retail price for a 6-pack will drop from $30 to $26.

“We will be launching bulk units that will allow people to start thinking about this on a price-per-can basis similarly to how they pay for alcohol, which would enable people to really think about it as a one-for-one replacement, rather than just an expensive way to get stoned,” he said.

Overall, the new capital will allow Cann to professionalize and streamline operations across the board. The company recently added production capacity through cannabis-focused co-packer SpaceStation and will have 12 full-time employees by March, including a new hire tasked with overseeing growth into new territories.