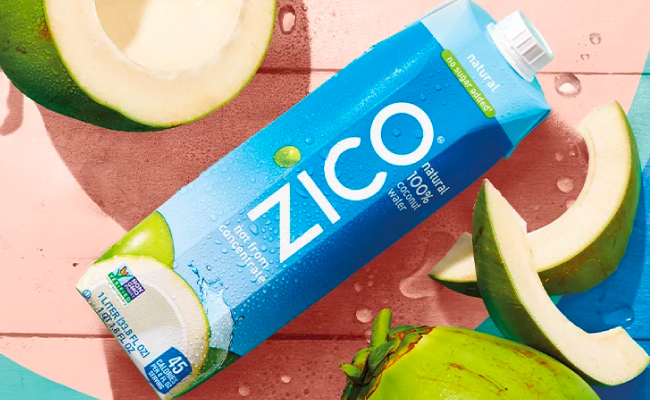 The Coca-Cola Company announced today it will discontinue coconut water brand Zico by the end of the year as part of a long term project to drop underperforming product lines from its portfolio.

The move comes after months of declining sales for the brand, which Coke acquired in 2013. According to market research firm IRI, sales of Zico have declined double digits across all product lines over the past year, with aseptic products down 33.3% in the 52-week period ending July 12. Zico’s products categorized as bottled fruit drinks declined 40.3% and refrigerated drinks fell 25.9% in the same period.

Launched in 2004, Zico helped create the U.S. market for coconut water along with Vita Coco and O.N.E. Long the second best-selling brand in the category, behind Vita Coco, Zico’s departure is set to reshape the coconut water market by creating room not just for smaller brands to rise up, but also presents an opportunity for its chief competitor to seize further market share.

In addition to Zico, Coke is also weighing whether or not to drop several other SKUs and product lines, including stevia-sweetened Coke Life, Diet Coke Feisty Cherry and regional soda brands such as Northern Neck Ginger Ale and Delaware Punch. The announcement comes just months after the company axed longtime portfolio mainstay Odwalla, stating in July that that decision came “at a time when it is more important than ever to evaluate where we can improve efficiencies in our business and operations.”

In a statement to the Wall Street Journal, a Coke spokesperson said the Zico decision comes as the company is “winnowing down” its product portfolio to focus on brands that can achieve a large scale.

The Coca-Cola Company did not return a request for comment from BevNET.

In quarterly earnings calls over the past year, Coke CEO James Quincey has frequently talked about cutting underperforming “zombie brands” in order to streamline the conglomerate’s focus on its best-selling products. In the company’s Q2 call in July, referencing Odwalla, Quincey said the combined revenue of zombie brands on the cutting block made up approximately 2% of total company revenue and would require significant work and investment to scale and that it was more important to focus on recent acquisitions such as Topo Chico. As well, he noted the COVID-19 pandemic has forced the company to accelerate SKU rationalization plans.

Speaking with BevNET, Zico founder Mark Rampolla — who has not been involved with the brand since its sale and is now a co-founder and managing partner of Powerplant Ventures — said the news of its discontinuation was “sad” but unsurprising. Observing from the outside, Rampolla said he believes Coke had struggled for years to scale the brand, often making sudden shifts on teams and divisions that made it more difficult for Zico to gain consistent traction.

“I know James Quincey and I think he’s a brilliant operator,” Rampolla said. “I can imagine during a time of crisis that you look across your business and say — ‘Wait a second, we’re probably earning 90% of our profits off of, you know, the top 50 brands. Why spend all this time and effort [on Zico]?’ So, I understand. I think it’s a logical business decision.”

Though Rampolla said he didn’t believe Zico’s end was a negative signal for the overall plant-based beverage space, which continues to grow, the brand’s cancellation might be an alarm to entrepreneurs that Coke is out of the merger and acquisition market for some time — unless the target brand is already generating hundreds of millions in revenue. While this might cut off a major potential buyer for startup brands seeking an exit, Rampolla suggested the market itself may be evolving in regards to opportunities for small companies, as other strategics, buyout groups, IPOs and SPACs become attractive options.

Jim Tonkin, president of Healthy Brand Builders and the founding board member and investor in Zico prior to its acquisition, said he believed that when large conglomerates acquire entrepreneurial ventures they “lose the foresight and insight” it takes to grow such brands. Zico may have been a relatively minor brand within the Coke portfolio, making it a prime candidate for the chopping block, he said, but he urged young entrepreneurs to look to other long term options for their brands.

“Young entrepreneurial companies that think that Coke or Pepsi or Keurig Dr Pepper are going to be their savior — they’re smoking crack,” Tonkin said. “The number of those deals that are done are few and far between. So I think small merger and acquisition, I think the combination of putting companies together in order to make one larger company is something that could come out of this COVID structure. [They should look at] sharing overhead, sharing supply chain and distribution and co-branding opportunities.”

Brad Barnhorn, an industry expert and former board member to acquired beverage brands Kevita and Chameleon Cold Brew, as well as the founder of Fantasia Fresh Juice Company — a brand which itself was later discontinued after merging with Naked Juice — said many in the industry sometimes improperly view Coke and other strategics based on their behavior over the past decade as viable acquirers of small, scalable brands, when in reality decisions such as the Zico and Odwalla cuts should be looked at within the context of their long term, broader portfolios which requires brands to achieve significant scale and profitability.

“We need to look at these moves as part of a broader portfolio strategy and brand acquisition and exit model which often shifts generally over time and specifically when a new CEO team takes the helm, such as at Coke in 2017,” Barnhorn said. “Strategics may make selected acquisitions in growing categories where they believe they can build long term scale given what they know at the time, but if they are disciplined in managing the portfolio they can be equally driven to exit a brand if category, brand and market dynamics materially change such that the original acquisition and long term scaling thesis is no longer intact. Right now it seems clear they see more long term potential in areas such as energy and even potentially alcoholic beverages with the Topo Chico hard seltzer extension than they do with premium juice and coconut water where Odwalla and Zico had lost momentum and market position in what in the overall beverage landscape are relatively small, mature categories.”

For Zico’s chief competitor, however, Coke’s decision means something else altogether: Opportunity.

Mike Kirban, founder and CEO of Vita Coco-maker All Market, Inc., said there is no longer a clear number two in the coconut water category and that his company had long been eating into Zico’s shelf space over the past several years. As well, Kirban suggested that Zico had actually been a drag on the coconut water category for several years, citing MULO data that showed the category down 1.54% between 2015 and 2019, while Zico was down 37% in the same period, while Vita Coco has continued to experience low double digit growth. Coke’s decision, he said, could lead to retailers re-evaluating coconut water as a potentially stronger set than it had previously appeared.

“I think Coke just realized that they’re never going to be the number one player in the category, not only because they have a brand that never worked as well, but because they never had the supply chain,” Kirban said. “We had a huge competitive advantage by building this robust supply chain super early, which gave us a major leg up in terms of anybody else in the category trying to get to scale. And there’s never been anybody who’s really got to scale in this category besides us because of that.”

Kirban noted that Zico had been “in freefall” for some time and had been losing national accounts ahead of today’s announcement. For Vita Coco, the next step is to move in on channels where Zico leaves white space, primarily in food service accounts, but also ecommerce and certain national retailers.

Kirban added that innovation will continue to play a significant role in Vita Coco’s strategy, citing its Pressed line, which launched last year, as a product that has helped bring new consumers into the category.

Like Tonkin and Rampolla, Kirban also believed Zico’s failure came from a lack of entrepreneurial drive within the Coke system. Inversely, he cited Coke’s relationship with sports drink BodyArmor, which is distributed by the conglomerate but maintains an independent leadership team that tackles the market from an entrepreneurial standpoint, as an example of a brand succeeding on red trucks.

But even as Vita Coco may benefit from the demise of its closest competitor, Kirban admitted the announcement was bittersweet, as it marks the end of an emotional journey.

Likewise, Rampolla — who detailed his entrepreneurial journey in a 2016 book about Zico titled High Hanging Fruit — said the news of the brand’s demise saddened him.

“There’s a lot of heart and soul that was put into that brand by so many,” Rampolla said “I feel as much, if not more, for everyone that worked with us — all the suppliers and distributors. I’ve heard from hundreds and hundreds of people today. Clearly this brand touched a lot of people.”