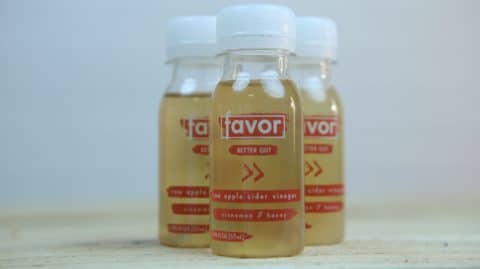 What makes Favor’s ACV shots special?  Their two proprietary blends – Ginger Lemon Cayenne & Honey Cinnamon – mix Raw & Unfiltered Apple Cider Vinegar (with “Mother”) with other functional ingredients, providing a trustworthy and better tasting experience.  They’re also formulated to have less than half the acidity of straight ACV, allowing for super safe consumption, and maintaining the recommended daily dose of ACV.  This means that each shot packs a punch and leads to better gut health and a stronger immune system.

Founder Ben Wheeler began Favor as both a response to the over-complicated health products he was seeing and a lack of drinkable ACV in the market.  The Favor mission is to provide people with a daily health boost in the simplest way possible and embody the idea of less but better.

Favor has partnered with D.C. based Union Kitchen’s Food Business Accelerator, allowing them to quickly expand to ten area store locations since their launch early this year, with more on the horizon.

Favor shots are also available online at drinkafavor.com and you can follow them on social media @drinkafavor.