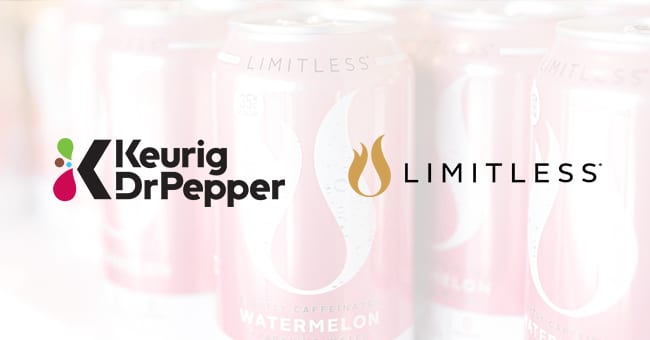 In a statement sent to BevNET, KDP said Limitless adds to the company’s “already strong water lineup” which includes brands such as CORE Hydration, Bai, and Evian, the latter of which is distributed through a long-term master agreement with Danone Waters of America.

The company also produces a line of cold brew coffees and green teas available in kegs, as well as wholesale coffee beans. The coffee and tea products have been previously available as RTD products, but the company stopped actively selling the lines without discontinuing them as it focused on sparkling water for the past year. It is not immediately clear whether KDP — which has developed a robust coffee business through its Keurig products and roster of allied RTD brands including Peet’s, FORTO, and High Brew — will seek to utilize Limitless’ coffee business or focus solely on sparkling water.

The acquisition comes as retail sales of the U.S. sparkling flavored water category have neared $2.5 billion, according to Nielsen, led by brands such as LaCroix, Polar and PepsiCo’s Bubly. In November, The Coca-Cola Company announced a new sparkling water brand, AHA, which features both caffeinated and non-caffeinated varieties. Although it has established a robust still water business, KDP has until now lacked a significant play in the category.

Limitless has established a nationwide footprint through retailers including Walmart, Pick n Save, HyVee, Shaws, Central Market, Fresh Thyme and Mariano’s. The brand is also available online through Amazon. The company previously partnered with beverage incubator L.A. Libations as a portfolio brand.

Update 1/24/2020: KDP confirmed to BevNET in an email that it will continue to work with Matros “to maximize the product’s potential” but will manage the brand through its existing marketing and commercial infrastructure. Current Limitless employees will not be carried over but will be eligible to apply for positions within KDP.

As well, KDP said that while the acquisition includes Limitless’ coffee business, the company intends to focus on the sparkling water line.