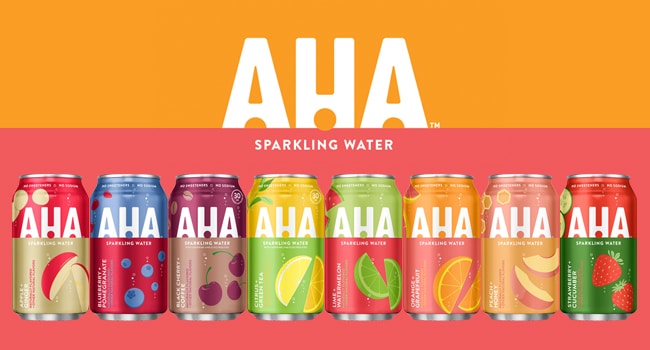 “As the largest and fastest-growing part of the water business, mainstream flavored sparkling water is a segment we know we must double-down on,” said Celina Li, VP of water at Coca-Cola North America, in a statement on the company’s website.

“AHA is our big-bet brand in this big-bet category,” she added.

Nilesh Karava, who leads Coke’s R&D efforts within water, said the decision to develop flavor combinations rather than single-flavor SKUs was motivated by a desire to create “something new and differentiated” that could still appeal to a wide consumer audience. Starting from an initial list of about 80 potential pairings, Karava’s team conducted extensive consumer research and testing before settling on the final lineup.

“Some of the flavors we landed on – green tea, honey and black cherry, for example – are very niche,” he said. “If we were to launch these on their own, we’d be limiting our consumer base. That’s why we paired mainstream fruit flavors – berries and citruses – with trending tastes, or what we call ‘halo’ flavors.”

As it continues to seek out healthier options as part of its “total beverage” strategy, Coke has previously dabbled in the sparkling water space. In addition to releasing a carbonated version of its national water brand DASANI, the company debuted smartwater sparkling earlier this spring, which followed its $220 million acquisition of Mexican import brand Topo Chico in 2017.

Yet Coke, as well as other beverage giants, has watched PepsiCo seize the advantage in 2018 with its own line of zero-calorie flavored sparkling water, Bubly, which has grown sales by triple digits on its way to taking a 6.2% dollar share of the category this year, according to data from IRI. The category has also been fueled by private label products and a slew of high-performing independents, such as Sparkling Ice, Polar, Hint and LaCroix.

According to IRI, sparkling water sales are up over 13% through August.

The launch of AHA is set to reshape Coke’s broader bottled water segment strategy with immediate effect: the new line will replace DASANI Sparkling at retail, though it will continue to be available on DASANI PureFill and Coca-Cola Freestyle machines. Meanwhile, smartwater sparkling — launched this spring in three flavors in select U.S. cities and on Amazon as a more premium option — has yet to build a national presence. Though also limited in its distribution, sales of Topo Chico rose 37.3% year-over-year through August 11, totaling over $136 million, according to IRI.

Last month, Coke CEO James Quincey noted that the company was taking a closer look at bottled water, following just 1% growth in the hydration segment, which also includes sports drinks, during the third quarter. “Our performance in the water category has not been as strong as we’d like,” he said. “We’re working on further plans to address this in the marketplace in the near future.”

In a statement on Coke’s website, Shane Grant, president of Coca-Cola North America’s Still Beverages Business Unit, indicated that the company will continue to be aggressive in exploiting opportunities to grow and innovate across bottled water.

“We’re constantly expanding our portfolio with new categories, flavors and packages,” he said. “This vision is coming to life through the fastest-growing category in our largest market with innovations that meet evolving needs and preferences. Water is a primary example of how Coca-Cola North America is embracing a true total beverage company strategy with exciting new brands like AHA.”

Euromonitor forecasts bottled water — which includes still, carbonated, flavored and functional bottled waters — to grow at a compound annual growth rate (CAGR) of 3.8 percent over the next five years and by 20.5 percent through 2023. During that period, sales are projected to grow at a CAGR of 2 percent.