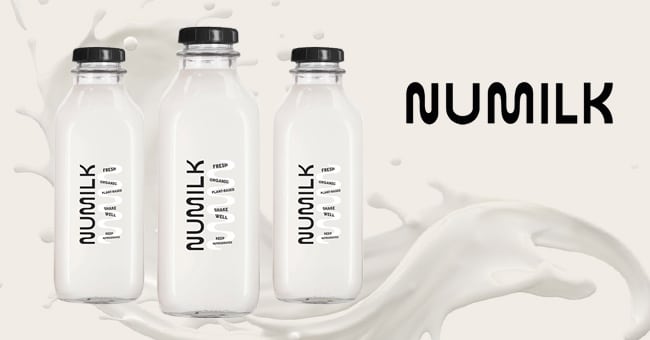 The emergence of in-store nut butter grinders and citrus juice squeezers has shown that natural retailers are increasingly interested in dedicating floor space to machinery for customizable products. Now, New-York based food tech startup The Numilk Company is seeking to introduce that model to plant-based dairy alternatives through a line of internet-connected machines that can make fresh almond and oat milk on the spot.

Founded in 2017 by CEO Ari Tolwin and CPO Joseph Savino, Numilk has developed a proprietary vending machine capable of producing nearly any type of plant-based milk. Speaking with BevNET, Tolwin, who previously served as the founder and CEO of Happy Tree Maple Water, said the fountain model allows Numilk to immediately adjust to changing consumer and market demands.

“One of the beautiful things about what we’re doing is that typically brands have to compromise in all sorts of areas,” Tolwin said. “They’re limited by their co-packer, limited by economics, limited by shelf stability, limited by needing to slot onto a certain shelf and have a standardized pack size. We’ve been able to look at all aspects of the business without limitations and figure out what makes the most sense.”

Numilk launched its first machines in March 2018, which offered only almond milk. Since then, the company has been deliberate in its rollout and sought to refine the machines before scaling. With the machines now ready for mass distribution, Numilk is currently available in nine Northeast region Whole Foods stores with machines capable of producing both almond and oat milk. Consumers can also choose to add other ingredients, including organic maple syrup and Himalayan pink salt.

While its footprint has been limited to date, Tolwin said Numilk is prepared to expand nationally this year, targeting “desirable geographies” on the East and West Coasts and in major cities. The company will also partner with “a prominent national retailer,” he said.

The machines utilize a milling system and are equipped with water filters that remove sediment and carbon. They also contain built-in cleaning systems and can be controlled and updated by Numilk via remote access. Each machine can be tailored to the demands or preferences of its specific location, Tolwin said, or to create limited flavor offerings for specific occasions. Future updates could potentially also allow consumers to adjust for texture and mouthfeel. 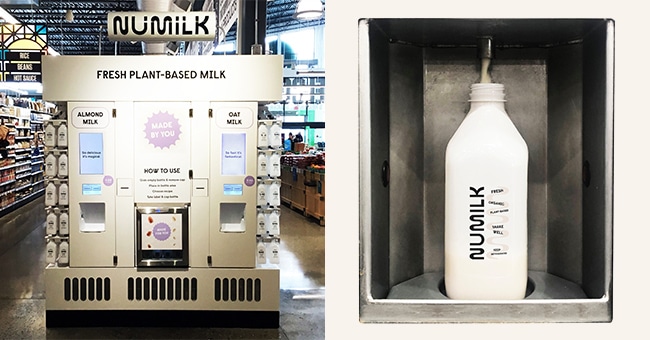 “The machine is a platform,” Savino said. “There are other milk companies out there built around a specific ingredient or packaging format, whereas we’re built around a platform that gives us tremendous flexibility in terms of packaging format and the types of milk that we’re making. If there are environmental or economic issues affecting one kind of dairy-free milk, other brands might struggle to deal with that whereas we would be well equipped to turn on a dime and adjust accordingly.”

Currently, Numilk sells 32 oz. bottles for $4.99, but the company has considered additional pack sizes. The bottles may or may not be refillable depending on local health department and individual store policies. The bottles are restocked daily by store employees.

According to Numilk’s internal data, the machines have already seized in-store market share from packaged non-dairy competitors, comprising as much as 30% of the category in some locations. Tolwin compared the popularity of Numilk’s machines to the similarly positioned in-store nut butter grinders and citrus juice squeezers, noting that freshness and customization are strong draws for certain consumer segments.

Tolwin also noted that the machines act as in-store “billboards” for Numilk and that consumers have found them intuitive to use. While Numilk does have an online presence, Tolwin said the company will primarily allow the machines to advertise themselves rather than focus on costly marketing campaigns.

“It’s just a completely different animal [than CPG products],” Tolwin said. “Our customers appreciate the freshness, the taste, the nutritional value, the clean label of our ingredients and there’s really no other substitute. From a market response attitude, it’s been tremendous.”

According to Tolwin, The Numilk Company has raised roughly $10 million in financing from individual investors, including some experienced beverage industry professionals. The company has focused on bringing in talent from both the beverage and the tech industries, including former Happy Tree Maple Water head of finance and operations William Finkelstein to serve as COO and former LORD Corporation executive Lennie Friedman to serve as CFO and VP of engineering.

“In my mind, the three biggest trends in the entire food space are freshness, sustainability and plant-based,” Tolwin said, “We’re very well positioned to take advantage of those three things.”