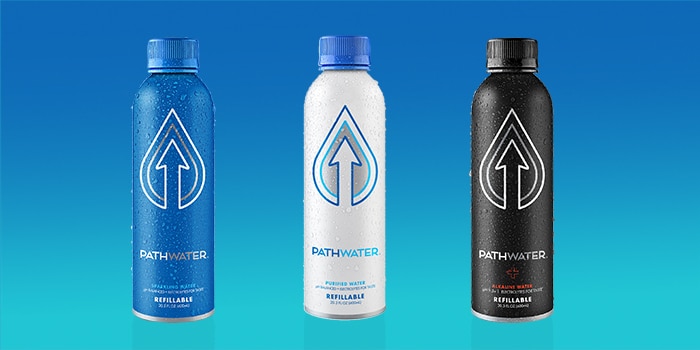 For the Fremont, California-based brand, which markets purified still water in sturdy 20 oz. aluminum bottles designed to be refilled, what’s inside the bottle has never been its primary focus. As CMO and co-founder Ali Orabi is fond of saying, Pathwater is a “bottled water company that is not in the business to sell water,” instead positioning itself as an environmentally responsible alternative to single-use plastic bottles. That mission remains the focus even as the company today announced an expansion of its product range into two fast-growing water categories: alkaline and sparkling.

Launching today on the company’s website, Pathwater is introducing alkaline (9.5+ pH) and sparkling varieties in a signature 20 oz. aluminum bottles. All three SKUs will also now contain electrolytes and sport a refreshed package design. Alkaline is sold in 9-packs of 20 oz. bottles ($22.99) and 25 oz. bottles ($27.99), while the sparkling version is available in 9-packs of 20 oz. bottles for $22.99. The products will launch on Amazon in April, followed by a wide retail debut in singles later this year.

Orabi said both new PathWater varieties are aimed at matching the brand’s core offering of an environmentally superior alternative to single-use plastic bottles to a unique use occasion: fitness and exercise for alkaline and elevated refreshment for sparkling. When introduced at retail in single bottles, the new SKUs will give Pathwater a bigger presence in grab-and-go coolers as well. The idea, co-founder and CEO Shadi Bakour noted, is to give consumers more ways in which to connect with the brand’s overarching cause — or not, if they choose.

“It gives people a reason to avoid plastic,” he said. “If they want to reuse the bottle, they can. But if they want to recycle it, they are still doing something good for the planet.”

Still, Bakour noted that highlighting the PathWater’s ability to be refilled and reused remains a major component of the brand, and the overall momentum behind water dispensing technology is an encouraging sign for PathWater as it moves beyond still into more tightly defined water categories. Last April, PepsiCo announced the launch of a new sparkling water machine designed for office, hotel and on-premise accounts that offers six flavors of fizzy water. Meanwhile, SodaStream, Pepsi’s at-home carbonation platform, grew revenue over 20% last year.

“The reality is that people that drink alkaline water or sparkling water, a lot of times they’ll actually have refilling stations that will provide that same or similar type of water to them,” he said. “Ultimately, what we are trying to create at PathWater is an end-to-end solution for every single beverage in the entire beverage category and entire market, across bottled water but also across other beverage offerings.”

“It gives people a reason to avoid plastic,” he said. “If they want to reuse the bottle, they can. But if they want to recycle it, they are still doing something good for the planet.”

Like the new flavors, PathWater’s Student Brand Ambassador program is another weapon in the company’s war on single-use plastic bottles. To join the initiative, students sign a petition, provided on PathWater’s website, demanding their school bans single-use plastic bottles on campus. Once that student gathers a sufficient number of additional signatures, the petition is submitted to the company’s sales department, which then reaches out and begins a dialogue with the school’s nutritional director about replacing single-use plastic water products with PathWater. For each school that signs up, the brand will donate one hydration station per 2,500 students, allowing them to refill their bottles.

That process of leveraging public backlash against plastic bottle waste to land new business already yielded a major success last year, when San Francisco International Airport banned single-use PET bottles and made PathWater an official partner. That experience has helped the brand land placement within other transit hubs — including Seattle-Tacoma International Airport and John F. Kennedy International Airport in New York — and also outside the U.S. PathWater is now available at 1,200 7-Eleven locations in Mexico, as well as in Bermuda, Costa Rica and Canada, with Dubai currently in the works.

PathWater isn’t the only brand seeking to capture consumers looking for an alternative to plastic. All Market Inc., Vita Coco’s parent company, introduced its own aluminum bottle line, Ever & Ever, in both sparkling and still varieties last June, mainly directed towards food service providers. Other players in the bottled space include Proud Source Water, while buzzy startups like BevNET Award-winner Liquid Death and “Aquaman” star Jason Momoa’s Mananalu are marketing still water in aluminum cans.

Further differentiating itself from the growing field, PathWater has also found success in partnering with major brands such as Adidas, Lockheed Martin and Salesforce on custom co-branded products. Among corporations seeking to take a more socially conscious stance, teaming with the brand helps turn the bottle into a method of building a deeper connection with employees or participants.

“Rather than us trying to promote through other people, people and organizations are trying to promote themselves through us,” said Bakour . “We’re being approached by these people because they want to show that they care about the environment, and PathWater is a perfect way to do that.”