Heading into the long Thanksgiving weekend, beverage brands are looking to serve up new products for consumers during the holiday season. In this roundup, we highlight recent releases from the past two weeks including gift packs, limited releases and wintery flavor launches, alongside new entrants in the RTD cocktail and CBD categories. 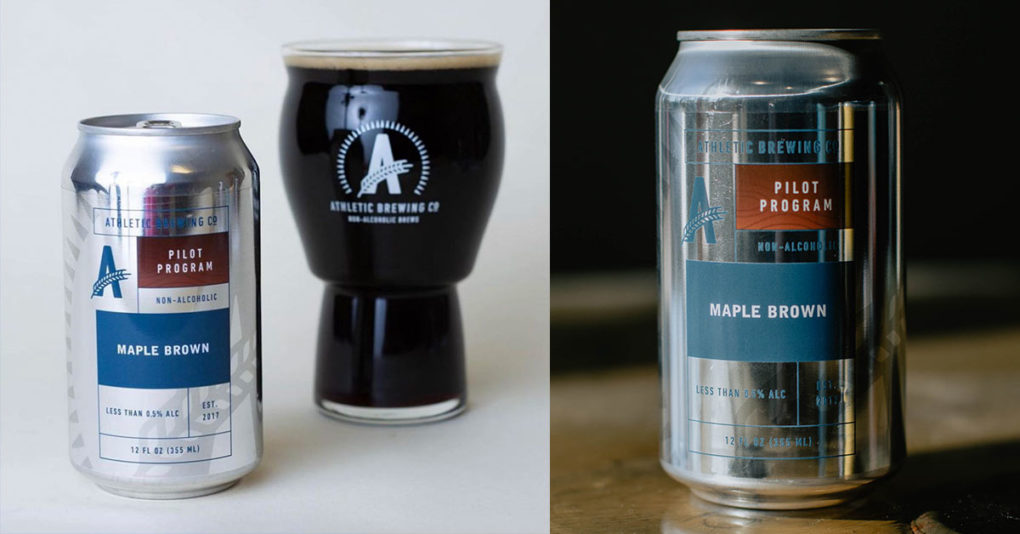 Non-alcoholic beer brand Athletic Brewing has partnered with New England-based maple water producer Drink Simple for a Maple Brown brew as part of its Pilot Program line of limited edition flavor launches. The beverage is made with maple water and maple essence and has notes of chocolate, nuts and caramel flavors. Each 12 oz. can contains 90 calories and the drinks are available in 6-packs for $12.99. 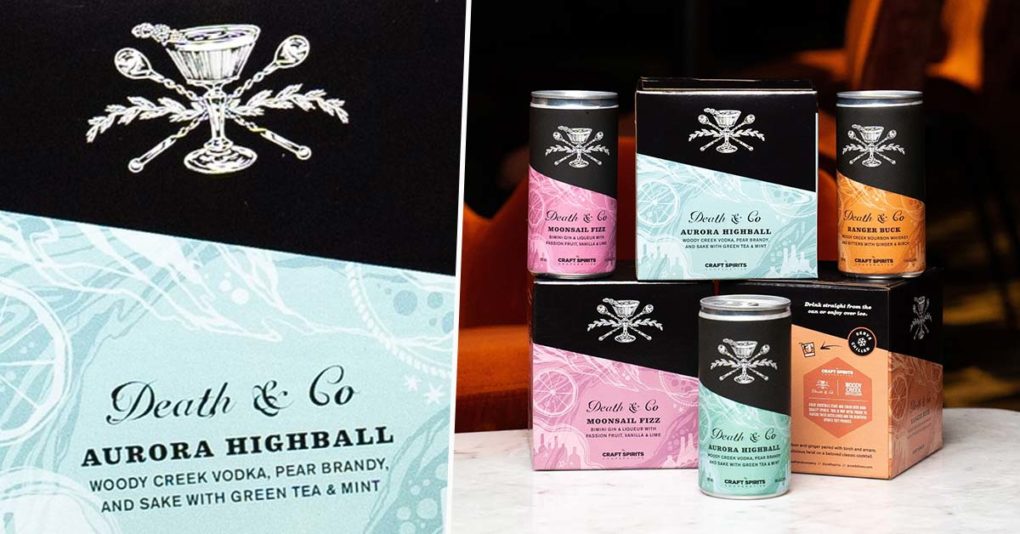 Restaurant and bar chain Death & Co., which established itself as a leader in the craft cocktail movement after its founding in 2006, is now entering the CPG industry with a new line of canned ready-to-drink cocktails based on its own custom creations. Varieties include Moonsail Fizz, made with gin and liqueur with passion fruit, vanilla and lime; Aurora Highball, containing vodka, pear brandy and sake with green tea and mint; and Ranger Buck, a bourbon drink featuring bitters, ginger and birch. Each 6.75 oz. can retails for $5-$6 or $20-$24 per 4-pack. The line is rolling out into retail in California, Georgia, Maine and New York. 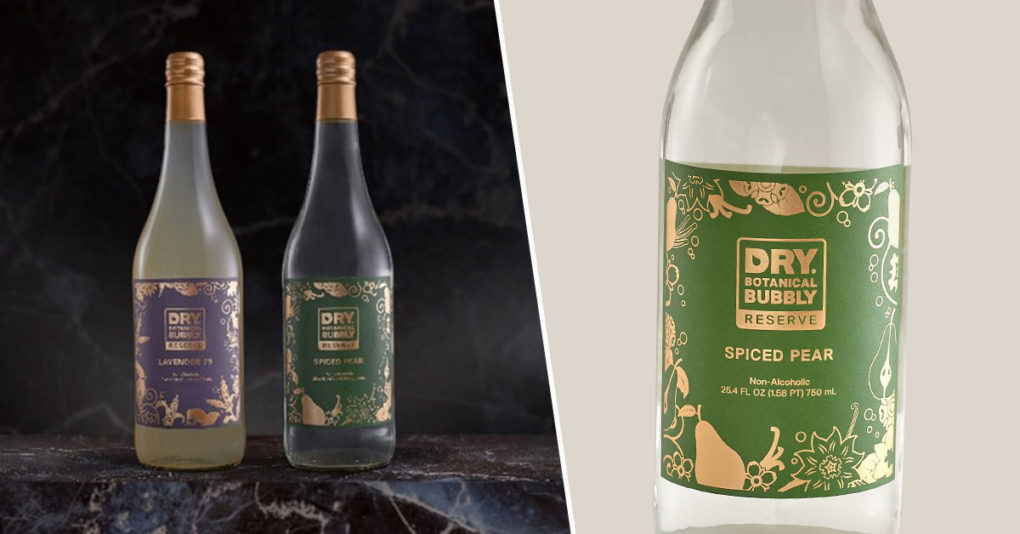 Botanical soda maker DRY has released the latest seasonal varieties in its Botanical Bubbly Reserve line. Lavender 75 and Spiced Pear are non-alcoholic and complexly flavored sparkling beverages intended for special occasions like holidays and weddings. Each 64 oz. bottle sells for $8.99 and is available online via Amazon and the brand’s website and will also be available in select retailers. 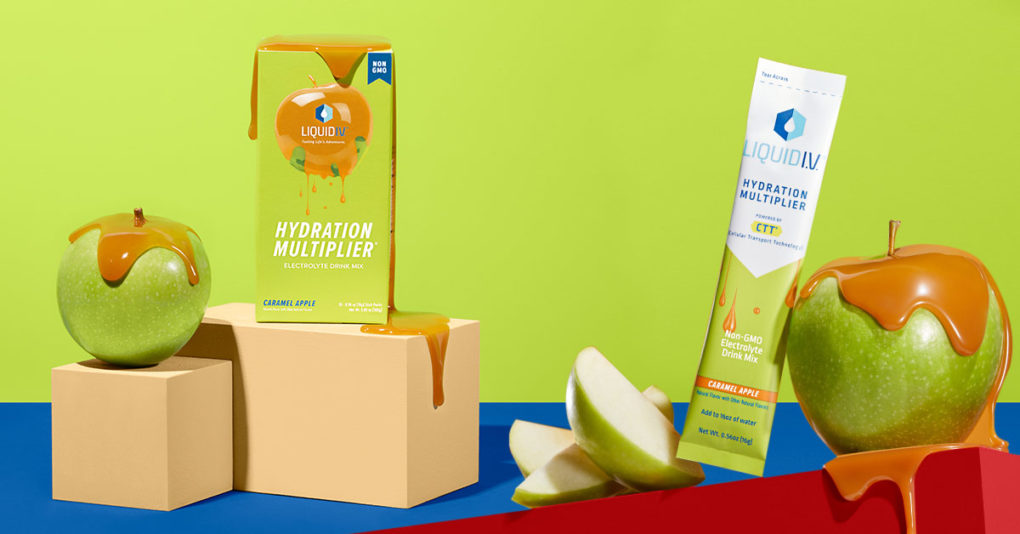 Liquid I.V., the Unilever-owned powdered hydration brand, has launched a limited edition Caramel Apple Hydration Multiplier flavor in time for the holidays. The powdered drink can be mixed with water and served hot or cold. It is available exclusively online from the brand’s website for $24.99 per 10-stick carton. 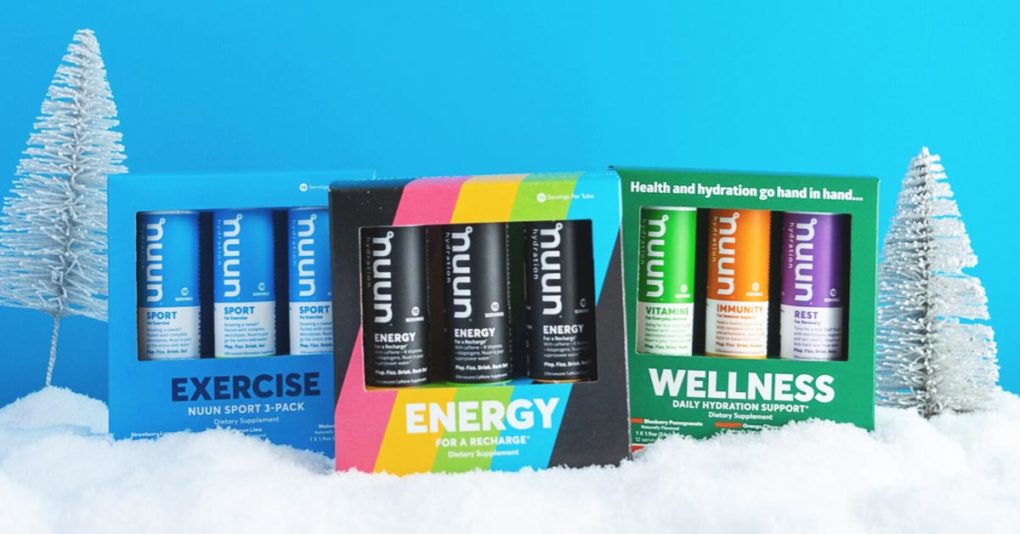 Nuun is offering limited edition, stocking stuffer 3-packs through the month of December. The packs are available in function-specific varieties of Energy ($24, with Berry Blast, Ginger Lime Zing and Tropical Punch flavors), Wellness ($21, Vitamins Blueberry Pomegranate, Immunity Orange Citrus and Rest Lemon Chamomile flavors) and Exercise ($21, with Strawberry Lemonade, Lemon Lime and Watermelon flavors). Each pack contains 30 servings. The 3-packs will be sold on the brand’s website and in retail in Whole Foods stores. 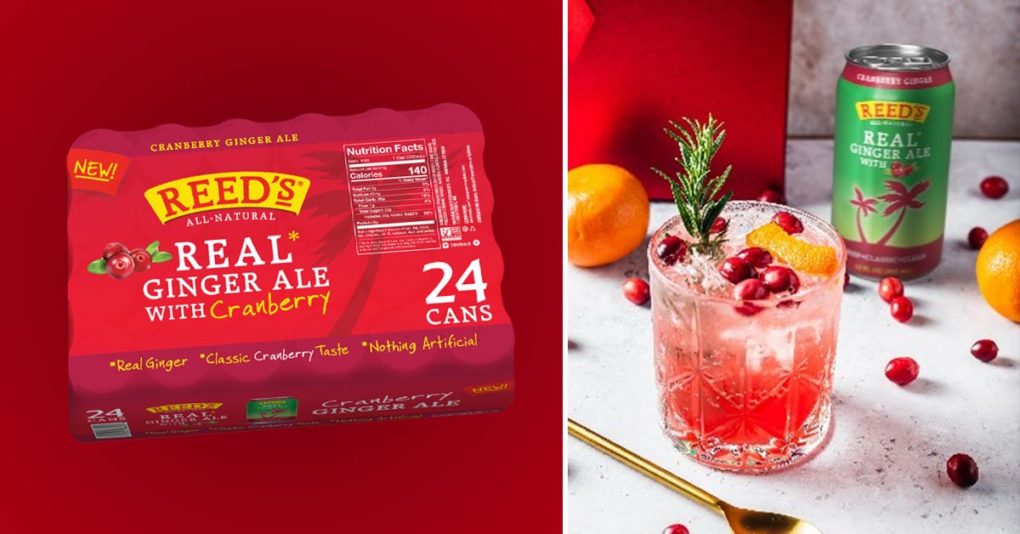 Ginger soda maker Reed’s is getting into the holiday spirit with a limited edition REAL Cranberry Ginger Ale flavor, available exclusively in 24-packs at 70 Costco stores in six Northwest states. The Non-GMO Project certified flavor is made with organic pressed ginger and cane sugar. Each 12 oz. can contains 140 calories. 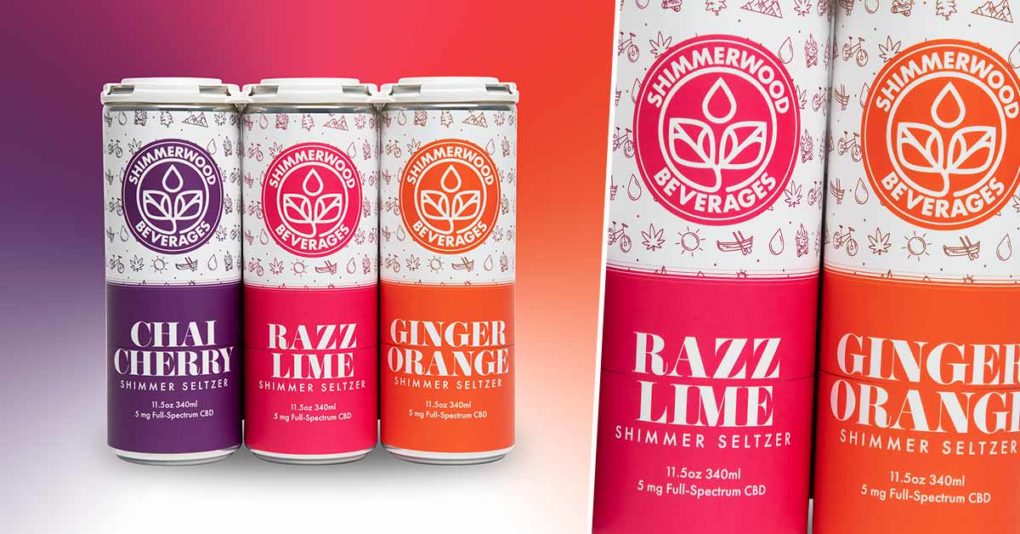 Chai Cherry is the latest addition to Shimmerwood Beverages’ line of CBD seltzers. Containing “the woodsy flavor” of cherry bitters, the drink also includes chaga mushroom, chai spices and 5 mg of full-spectrum CBD per 11.5 oz. can. The flavor launch comes as Shimmerwood expands its retail footprint into New Jersey and Virginia. Online, the Chai Cherry SKU can be found in 4-packs for $20 on the brand’s website, and in a 6-pack variety sampler for $25. 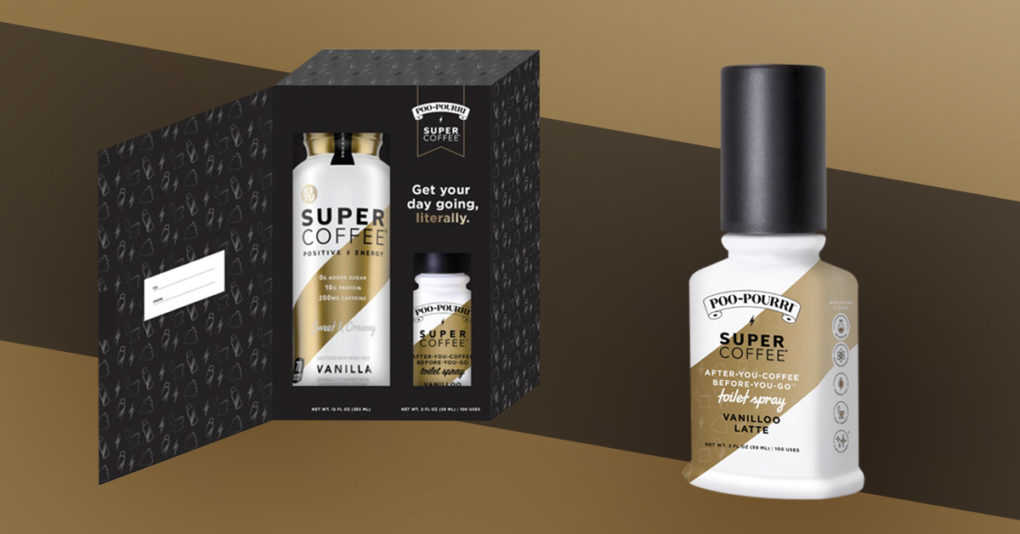 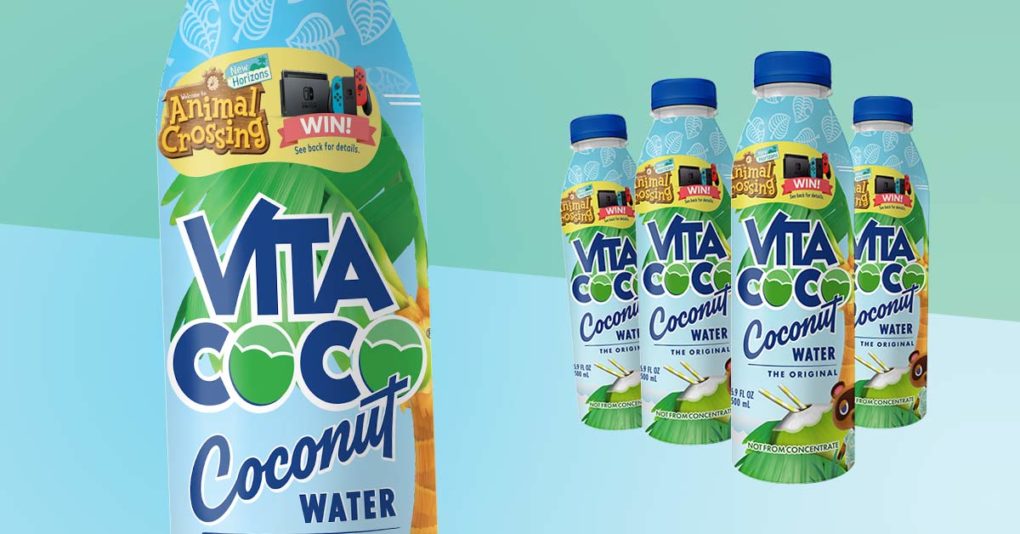 Vita Coco is plugging in with Nintendo for its first ever limited packaging partnership. The coconut beverage maker is releasing bottled coconut water featuring the game Animal Crossing: New Horizons, which will be available nationwide in retailers including Walmart, Target, Ralph’s, Kroger and CVS among others. The promotion also features an online sweepstakes through January 15 where consumers can enter to win a variety of prizes including Nintendo Switch systems. The sweepstakes, however, is not sponsored by Nintendo.\ 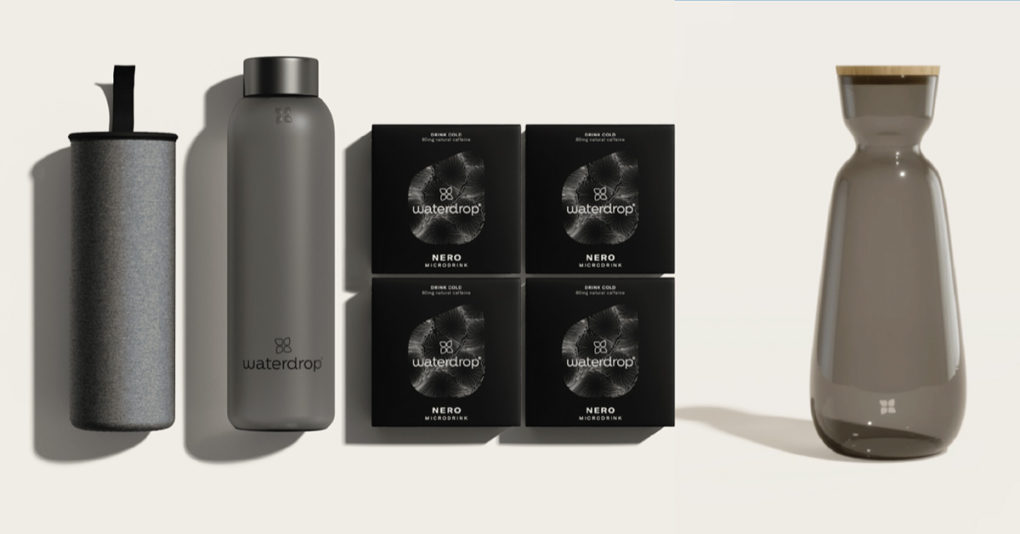 Water enhancer brand Waterdrop has introduced NERO, a new Natural Energy variety to its proprietary “microdrinks” line. Each serving contains 80 mg of natural caffeine and vitamins B6, B12 and C. The drinks are sugar free and low calorie. Each 12-pack retails for $13 and is available on the brand’s website. Alongside the line extension, Waterdrop is also selling NERO-themed carafes, glasses and straws.