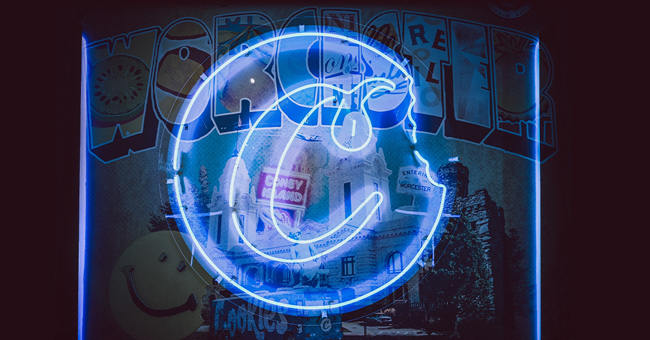 Massachusetts, it’s time to wake up and smell the Cookies.

After establishing itself as one of the most popular and fastest-growing names on the West Coast scene, cannabis brand Cookies has arrived with its first East Coast retail location opening in the Bay State earlier this month. The new store in Worcester, New England’s second largest city, marks a new chapter in the company’s steady growth outside of its home market, and an indication of how it plans to partner with local operators as it expands.

The company’s success has been authored primarily by its founders: cultivator Jai “Jigga” Chang and Gilbert Milam, Jr., better known by his rap alias, Berner. Though he is best known as a longtime presence on the music scene in the San Francisco Bay Area, the latter’s talent for marketing and branding, combined with Chang’s credibility within California’s deeply rooted cannabis community, has helped turn Cookies, which officially launched in 2012, into one of the industry’s hottest names. Berner helped seed the brand using his connections in music — Wiz Khalifa and Snoop Dogg became vocal fans — but the business truly took off when the company registered “Cookies SF,” a reference to popular strain Girl Scout Cookies, as a trademark for its clothing and merchandise line; while individual strains cannot be registered, the trademark protects Cookies from others trying to profit off the name.

Boasting an array of award-winning strains, the company has spawned sister brands like Lemonade, Mintz and Collins Ave (a partnership with rapper Rick Ross), while continuing to open new retail outlets. The brand currently markets everything from flower — spanning flavors like Cereal Milk and Sticky Buns to Cheetah Piss and Gary Payton, a latter an official collaboration with the NBA legend — to pre-rolls to gel capsules and vape cartridges, CBD flower and medicinal mushrooms.

Cookies’ burgeoning weed empire is now looking beyond California for greener pastures, and moving to Massachusetts, the first state on the East Coast to legalize adult recreational cannabis, was a long-held ambition for the brand, according to Crystal Millican, VP of Retail at Cookies. The company has an established playbook for opening up new markets: beyond sticking to the individual state’s regulations on medical and recreational sales, it means sharing its unique genetics and signature strains with locally based cultivation partners — in this case, CommCan, which also sells Cookies products from its two dispensaries — and bringing in licensed operators to work the store. For the latter, Cookies has partnered with Worcester-based weed shop New Día and is using its existing location and staff, as well as bringing on 23 additional hires. 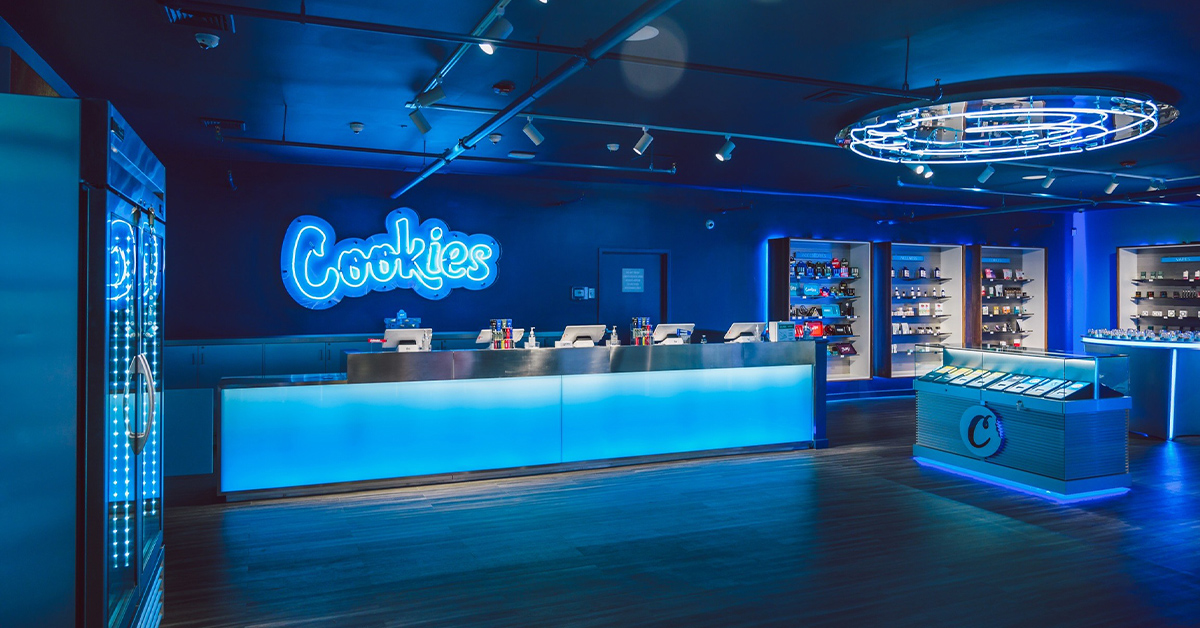 The Massachusetts store itself is meant to evoke a “moody” vibe, said Millican, with aesthetic touches like icy blue light fixtures and a table with built-in glass displays to showcase the products from its own brands as well as other Massachusetts-based growers like Revolutionary Clinics, Happy Valley and The Heirloom Collective, as well as CommCan. The store offers a wide variety of edibles, while its beverage options — limited thus far to infused seltzers from Hi5 — are sold cold out the cooler. Though it won’t carry any exclusive strains for the time being, other aspects of the store, from art on the walls to music played in-store, will be tailored to regional tastes, Millican noted, and will be the exclusive home for New England-themed Cookies merch.

With its first store up and running, Cookies is already eyeing further expansion in Massachusetts. Once growing capacity can meet the expected demand, up next is a store in the heart of Harvard Square in Cambridge, a hub for college students and one of the region’s most heavily trafficked tourist spots. Outside of New England, in addition to opening new stores the brand is leveraging its popularity to push into new concepts: see the soon-to-open Cookies Lounge in Coalinga, California, where on-premise consumption will be permitted.

Beverages will be part of that push as well, Millican said. Though the company declined to share further details on the drink, she confirmed that the brand’s first THC-infused beverage is “about to drop” in California before expanding into other markets in 2022. Berner has some experience in the category, having previously worked with vitamin and hemp seed oil-infused water Hemp2O. 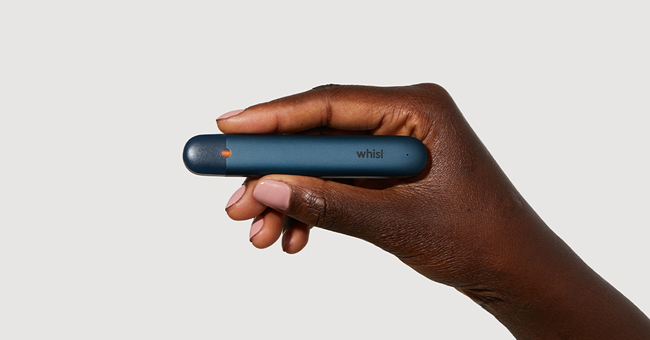 The pod-based vape system offers consumers three different CBD experiences tailored to specific use occasions: Tune In for focus, Intermission for all-day relaxation and relief, and Fade Out for winding down in the evening. Each pod contains 200mg of CBD isolate and zero THC. The rechargeable aluminum battery comes in two colors and uses a glass atomizer as the heating element.

“At Canopy Growth, we are pioneering the concept of using CBD to help consumers manage their moods at any given time of day,” said Andy Lytwynec, Vice President, Global Vape Business at Canopy Growth, in a press release. “With whisl, we want to empower consumers to quickly achieve focus, calmness or prepare for sleep with a modern CBD solution that is fast-acting and can fit seamlessly into anyone’s daily routine.”

For Canopy, Whisl represents an opportunity to build on its success so far in CBD; Martha Stewart CBD, a line of edibles, tinctures and infused pet products the company launched in partnership with the lifestyle guru last year, has become the best-selling CBD edible in the U.S., according to Canopy. Though Whisl is available online, the brand is spearheading Canopy’s biggest-ever retail launch by entering over 3,000 Circle K convenience stores nationwide, according to a press release. The retail chain has been widening its selection of affordable, on-the-go CBD products over recent months, as has competitor Yesway. 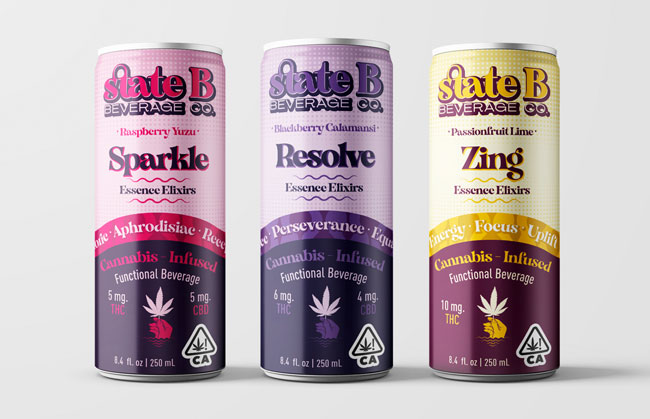 Canadian brand State B Cannabis Beverages is the latest name to partner with emulsions specialists Vertosa to develop proprietary formulations for its THC and CBD infused beverages.

The brain child of mixologist and entrepreneur Kelly Ann Woods, State B offers a range of sparkling infused beverages in 8.4 oz cans, each featuring a different balance of CBD and THC. The brand is extending its partnership with Vertosa, having used the company’s emulsions in its three most recently released SKUs: “Resolve” Blackberry Calamansi (6mg THC/4mg CBD), “Sparkle” Raspberry Yuzu (5mg each THC and CBD) and Zing Passionfruit Lime (10mg THC). Beyond their cannabinoid content, each line also contains a blend of adaptogenic herbs and botanicals tailored to a functional benefit, ranging from boosting libido (see the ashwagandha, damiana, passionflower, hibiscus and Beta-Caryophyllene in Sparkle) to stimulating creativity (Resolve features holy basil, schisandra berry, guayusa, blue spirulina and Linalool).

“We tasked Vertosa with helping us develop our new line of wellness beverages featuring functional ingredients that allow consumers to reach a specific state of mind, and the R&D team certainly rose to the occasion,” said Kelly Ann Woods, founder and Chief Executive Officer of State B. “Vertosa offers an incredible bioavailable emulsion for our beverages that helps us create delicious and consistent cannabis experiences for our customers. We’re proud to partner with a team whose commitment to science and the cannabis industry is unparalleled, and look forward to working together as we seek to expand our product offering.”

Despite the alliance, the next product from State B, Elevé, won’t have either THC or CBD. The three-SKU line (Passion, Focus, Drive) offers the same flavors and functionalities as the fully infused drinks, minus the cannabinoids. After that, next up is Shroom Boom, a line of medicine mushroom infused beverages set to launch in 2022. The company also markets Brujera Elixirs, a line of “canna tail” shrubs and tonics for making infused cocktails.

For Vertosa, the partnership adds to its growing list of beverage clients, which includes brands like Cann, Pabst Blue Ribbon, Lagunitas, Rhythm, WUNDER and Viv & Oak.