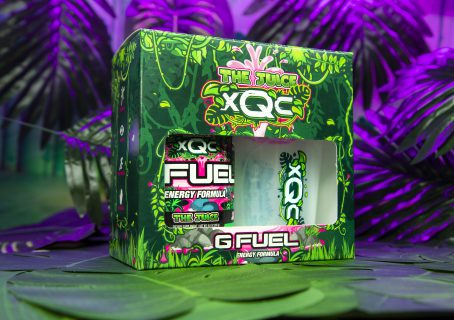 25-year-old xQc is one of the biggest and most-watched streamers on Twitch. Over 8 million of his Twitch followers have tuned in from around the world to watch his entertaining gameplay over 300 million times on the streaming platform. xQc has been a gamer for most of his life, having risen from casual gamer to professional Overwatch player, to now a full-time variety streamer, content creator, and member of Luminosity Gaming, one of the leading esports organizations in North America.

The Juice is sugar-free and loaded with antioxidants from 18 different fruit extracts. Each serving has only 15 calories and contains 140 mg of caffeine plus proprietary energy and focus-enhancing complexes. It’s the perfect formula for turning you into a juice lord almost immediately.

“There’s no question that xQc has The Juice. He’s easily one of the world’s most entertaining gamers and content creators to watch,” said G FUEL Founder and CEO, Cliff Morgan. “We’re excited to take our partnership with xQc to another level and introduce our fans to a new refreshing flavor that’s inspired by xQc’s favorite fruits from the jungle.”

The Juice is now available for sale in 40-serving tubs and limited-edition collectors boxes, which include one 40-serving The Juice tub and one 16 oz. The Juicer shaker cup, at gfuel.com/collections/the-juice. To celebrate The Juice’s launch, G FUEL and xQc are hosting a giveaway on Twitter and Instagram where two entrants from each platform will win The Juice collectors box. Follow @GFuelEnergy on Twitter and Instagram for more information on how to enter the giveaway.