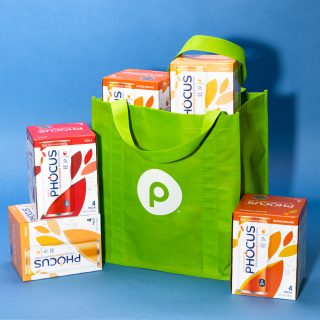 LOUISVILLE, K.Y. – Shoppers at Publix stores across the Southeast will now have a new caffeinated beverage option. Phocus – the health-conscious, thoughtfully-caffeinated sparkling water with zero calories, sugar or sweeteners – has added the popular grocery chain to its distribution.

Beginning this month, Publix shoppers in more than 700 stores in Florida, Georgia, Alabama, North Carolina, South Carolina, Tennessee and Virginia can find some of Phocus’ most in-demand flavors — including Blood Orange and Peach, as well as Cola, which won “Best New Product” in BevNET’s Best of 2020 Awards.

“We are so excited to announce our brand new partnership with Publix Supermarkets,” said Phocus CEO, Todd Creek. “Teaming up with Publix has been a goal for our company since day one, which makes this so special. It’s clear that the folks at Publix believe in the Phocus mission to help our customers get the most out of their day by providing what we think is the best caffeine experience on the planet. Working with Publix allows us to connect with thousands of consumers in the Southeast who have been looking for a naturally energizing, deliciously flavored, sparkling water without the sugar and sweeteners found in so many drinks.”

The deal comes on the heels of the March announcement of similar distribution agreements putting Phocus in 200 Albertsons stores, 70 Fresh Thyme locations and various other natural food stores. Together, the recently inked deals have added more than 1,100 retail locations to Phocus’ bricks-and-mortar distribution in the past four months alone. In total, Phocus is available in nearly 3,200 stores across the country.

In Louisville, Phocus is available at all area Kroger locations, Paul’s Fruit Markets and Heine Brothers, select CVS stores, along with a number of gyms, fitness and sports facilities.