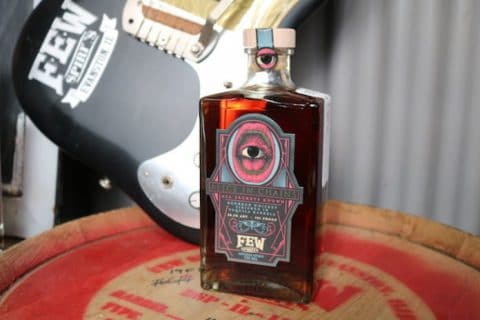 EVANSTON, Ill.— FEW Spirits and Warner Music Artist Services have  announce the release of All Secrets Known, a new, limited-release bourbon distilled by FEW Spirits Master Distiller Paul Hletko in collaboration with Grammy-nominated and multi-platinum selling Seattle Grunge pioneers Alice In Chains, whose music has stood the test of time and influenced a generation. Bottles feature a custom-designed label by artist Justin Helton.

All Secrets Known (SRP: $75/750 ml), a nod to the name of the opening track of Alice In Chains’ 2009 certified Gold release Black Gives Way To Blue, is FEW Bourbon finished for six months in tequila barrels and bottled at the most rock and roll of proofs, 101 (50.5% ABV). Bold, sweet, and spicy bourbon top notes that have become the hallmark of FEW and led to multiple category awards, are accentuated by grassy agave undertones.

Said Hletko, “There are no two spirits that have a closer association with rock and roll than whiskey and tequila. Bringing together elements of both, but in an unconventional, innovative way, is an illustration of what we try to do every time we distill a new product.”

“Alice In Chains is part of one of very few movements that can be legitimately credited with shapeshifting an entire culture, beginning with their first album, Facelift,” continues Hletko. “For us distilling, like making music, is about having the courage to ASK, ‘What if we…’ and being excited to find the answers – unlocking those secrets. Nobody sounds like Alice In Chains. We were inspired by their courage to create a sound that flouted convention and thought, ‘There are lots of tequilas finished in bourbon barrels, but it’s rare to find a widely-available bourbon finished in tequila barrels. Let’s do that instead’.”

Added Matt Young, EVP of Warner Music Artist Services, “Our team always seeks out the best in the business when it comes to our artist product collaborations. FEW Spirits was a no brainer when the idea first came up to create an Alice In Chains Bourbon Whiskey.”

Artist Justin Helton, of Status Serigraph, is no stranger to working with musical giants like Phish, The Avett Brothers, My Morning Jacket, Ween, and The Black Keys created the custom label.

“I’ve been a fan of Alice In Chains forever with Jar of Flies being one of the first CD’s I ever owned,” says Helton. “‘I Stay Away’ and ‘No Excuses’ were on repeat in my room. For this design I found inspiration in the name All Secrets Known. The eye in the mouth is a play on seeing all that’s been spoken. The color scheme is a nod to Black Gives Way to Blue, the album on which the song ‘All Secret Known’ appears.”

Helton designed the label in Adobe Illustrator and Photoshop, also using a mix of hand-rendered illustrations with imagery from the 1800’s to create a distinct look.

A Legacy of Rock and Roll Partnerships

All Secrets Known is yet another foray for FEW Spirits into partnerships with internationally-renowned music acts. In 2006, Hletko partnered with The Flaming Lips to create Brainville Rye Whiskey.

“Brainville led to access,” Hletko said. “Doors started opening and I’ve always felt like when you get a chance to work with cool people you admire, you’ve got to at least check it out. As a long-time fan of Alice In Chains and someone who has at various points made his living as a guitar player, the opportunity to work with someone like Jerry Cantrell, whose sound is unlike any other, was one we were determined to see through come hell or high water.

Limited-release All Secrets Known will be available in CA, CO, IL, NY, and WA and for purchase online through ReserveBar.com.

A grain-to-glass distillery since 2011, FEW Spirits produces award–winning craft whiskey and gin in a tucked away alley located in the growing Chicago suburb of Evanston, IL.. A historical town where Prohibition lasted until 1972, Founder & Master Distiller Paul Hletko changed the future of Evanston when he opened FEW Spirits Distillery, the first (legal) alcohol-production facility of any kind to ever open there.

Paul Hletko always knew he wanted to make craft spirits —produced in the local Chicago area—that offered something different, delicious and fun. Living in Evanston, a town that was prime for change after being dry for four decades post the repeal of prohibition, Paul felt it was the perfect home and backdrop for FEW and the brand. Deeply integrated into the brand story, both Evanston and Chicago are crucial elements of the FEW DNA and its inspiration. From its liquid, created from locally grown or sourced ingredients, to the look & feel of the design, which pays homage to the 1893 World’s Fair in Chicago— FEW is the true definition of a local Illinois craft spirit.

FEW Spirits features a refreshing and innovative portfolio including a stable of core spirits and several small batch limited edition specialty expressions. Each flagship spirit is a new take on the timeless liquors of the past; distilled from the very best grains, aged to perfection, and bottled under the FEW roof. The small batch limited editions hold true to the premium quality FEW drinkers have to come to love and expect from the brand, but offer something novel to the oft-ordinary taste and style we’ve all grown accustomed to.

In a world over saturated with mass-produced spirits, only few remain truly handcrafted, locally sourced and small-batched. FEW has never strayed from this—even as it grows, Paul and his team continue to provide consistently impeccable spirits that are true to their craft roots and reminiscent of their home base.

About Alice In Chains

Seminal rock band ALICE IN CHAINS recently toured in support of RAINIER FOG, which hit No. 1 across Billboard’s Rock, Alternative and Hard Music Charts and No. 1 on the iTunes Rock Album Chart and earned them a Grammy nom for “Best Rock Album.” Over the course of their remarkable career, ALICE IN CHAINS (vocalist/guitarist Jerry Cantrell, drummer Sean Kinney, bassist Mike Inez and vocalist/guitarist William DuVall) have garnered multiple Grammy nominations, sold more than 30 million albums worldwide, and amassed a diehard international fanbase whose members number in the millions.

Their discography features some of the biggest and most important albums in rock history, including 1992’s quadruple-platinum-certified “DIRT,” 1994’s triple-platinum-certified EP JAR OF FLIES, which was the first EP in music history to debut at No. 1 on the Billboard Top 200 and 1995’s self-titled double-platinum-certified ALICE IN CHAINS, which also entered the Billboard Top 200 at No. 1. They returned in grand style in 2009 with the critically acclaimed BLACK GIVES WAY TO BLUE, which hit No. 1 across the rock and alternative charts, earned a Grammy nomination, was certified Gold and hailed by Vice as “a record that’s as powerful as anything the band has done.” ALICE IN CHAINS remains one of the most successful and influential American rock bands of all time.