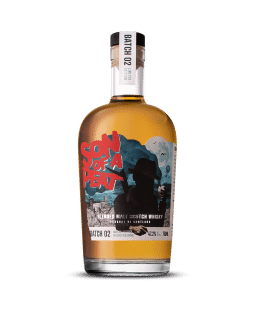 Son of a Peat was designed to provide a lip-smacking, smoking gun delight to whisky lovers at an approachable price. It certainly did just that. Son of a Peat Batch 01 received critical acclaim from the industry and consumers alike and sold out in record time.

Son of a Peat Batch 02 is now ready for release and is more than a worthy heir to Son of a Peat’s legacy. It shares the same DNA just with a touch more maturity and sherry richness to make the dram ever more complex yet just as smooth.

Each batch is unique and in short supply, but this is a dram to be enjoyed. Son of a Peat craves company and so members will be able to buy up to three bottles each, subject to availability; one to open, one to gift and one to save for later.

All 2,000 bottles will be available via a lottery system, exclusively to Flaviar members, so everyone gets the same chance to get their hands on this complex, commanding whisky bottled at the peak of its powers.

Expect another dark, intense yet strangely warm and welcoming dram from the ever-mysterious Son of a Peat.

Son of a Peat Batch 02 packs a powerful punch, weighing in at 47.2 percent ABV. It has been treated with the utmost of respect with each drop being hand blended, bottled, sealed and labelled to protect this most peaty of private labels. Son of a Peat is not to be messed with and so it is brought to you with no added color and non-chill filtered.

Grisa Soba, co-founder of Flaviar, commented: “Years of analyzing data and customer reviews on our platform has helped us understand what a perfect peated malt is for our members, and also what someone new to peated whisky, would enjoy as their first experience of a peated Scotch. With Son of a Peat we’ve been able to satisfy both camps, those that have already fallen for peat and those just starting to explore the peated Scotch world.

“We took our time in creating Batch 02 as it is important to follow up with a dram just as commanding and complex as Batch 01 and which pays serious homage to the peat. As part of our mission to democratize the spirits world – given demand is expected to be high, we’re selling via a lottery system, so every member gets the same chance at scoring a bottle or three at a decent price.”

On the palate, there are the usual suspects, peat and smoke with notions of seaweed that take you back to the Scottish shores. Quickly now, the sweetness of sherry and honeysuckle step forward and clear the smoke, but just for a bit, until the journey continues towards more earthy, oaky and woody flavor nuances. The finish is buttery and long-lasting.