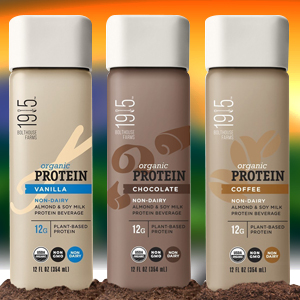 Announced prior to the 2016 Natural Products Expo, Bolthouse Farms’ 1915 line of organic beverages has extended its offerings to include three plant-based protein drinks.

These come in the form of Vanilla, Coffee, and Chocolate varieties, each of which has almond milk, soy milk, and added pea protein fueling the 12g of protein that you’ll find in each bottle. Each of the three flavors is rich, sweet (32-34g of sugar per bottle), and clean in finish, which should help the product have broad appeal. Other ingredients include coconut water, sugar, carob bean gum, and sea salt, as well as the individual flavoring elements for each of the formulations. These include cold-brew coffee for the Coffee variety, vanilla extract for the Vanilla variety, and cocoa for the Chocolate variety. Our only real knock on these flavors is that neither the soy or almond milk are overly dominant. Otherwise, what they’ve created is quite enjoyable and ticks a lot of boxes that are currently on trend.

On the outside, these flavors have the same square shaped bottle that you’ll find on their cold-pressed juices. Aside from being USDA Organic, there doesn’t really seem to be a lot of common ground between the protein drinks and the juices. That includes how they're processed: the juices are high pressure processed, while the protein drinks are pasteurized. We’re not sure if this will matter or not, but it does feel a bit confusing that what is effectively the same package is now pitching us something completely different in terms of formulation and benefits.

Otherwise, we’re not completely sold on the idea of mixing soy and almond milk as these seem like things that are, on their own, for two different consumers. Furthermore, leaving off front panel mentions of key ingredients, such as coconut water and pea protein, seems potentially limiting.

Still, what they’ve created definitely feels like it has a place in the market: being organic, plant-based, and having a relatively clean ingredient list will help it differentiate from other mainstream offerings. But for better or worse, the brands that it stacks up against likely also includes Bolthouse Farms’ very own protein drinks. Therefore, the potential for cannibalization is certainly a possibility.

Overall, we think that Bolthouse has done a nice job of creating an organic plant-based protein drink that can, at least as far as the current selection of mainstream premium offerings is concerned, hold its own. It should definitely be a nice extension for the 1915 brand.