Launched in 2016 by the company behind , Alta Palla has been focused on establishing itself as a premium player in the organic carbonated beverage space. To date, this has come in the form of sparkling juice. Now, in spring 2017, the company is launching a new line, propelling the brand into an on-trend but highly competitive category: unsweetened flavored sparkling water. 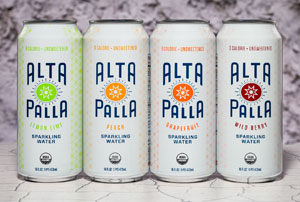 Alta Palla has chosen to attack this category with a 16 oz. can, which is larger than other can-based competitors. The size puts it on part with products that are packaged in plastic bottles. It’s hard to say if a non-resealable package of this size is going to beat out a smaller and perhaps more appropriately portioned sized can, but it is something that gives the product a visual point of differentiation.

We’d say the same about their branding and design, which has a bit more visual pop and polish than some of the brands that it will compete with. Package design has, at least in recent years, really been something of a strong suit for and this is no exception. It’s clean, sophisticated, and catches the eye. However, if there’s anything that could be improved upon it would be how they handle the differences between the flavors -- it’s a bit too subtle.

As for those flavors, there are four USDA Organic certified offerings that they are launching with: Lemon Lime, Wild Berry, Grapefruit, and Peach. From our perspective, they are all crisp and refreshing. The fruit is subtle rather than flavor forward, which makes the differences between the four SKUs a little blurry. That said, we’d be hard pressed to pick one as our favorite as they are all quite good. But in all four cases, we think they’ve done a nice job of creating fruit flavors that are straightforward and clean.

Overall, we really like Alta Palla’s expansion into water. It seems like it really adds some breadth to as a company and it’s a solidly executed product that can definitely hold its own in the space.