While there’s plenty of traction and a seemingly never ending supply of cold-brew coffee drinks, cold-brew tea is something that has been tried by only a small number of companies, and it hasn’t exactly found the same level of success. In our opinion, one of the big reasons that this has been the case is that cold-brew tea, unlike cold-brew coffee, doesn’t yet have a noticeably different taste than its hot brewed counterpart. 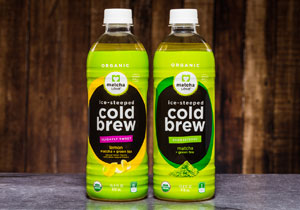 ITO EN, which is the Japanese company behind Matcha LOVE, is attempting to make an effort to change that. Their Matcha LOVE Ice-Steeped Cold Brew, which was announced for the 2017 Natural Products Expo West, uses, as the name suggests, a process of steeping the tea in ice. The line, which features two flavors, Unsweetened Matcha + Green Tea and Lemon Matcha + Green Tea, is not only enjoyable, but also sets the stage to help the Matcha LOVE brand differentiate itself from the rest of the shelf stable tea set.

As for the two flavors, both are well-executed. The Unsweetened offering is definitely for a more serious tea drinker than its Lemon counterpart. It’s clean and smooth, with a light, but slightly grassy green tea flavor. But it’s the Lemon variety that is really the star of the show. It’s sweetened with a modest 15g of sugar per bottle. The difference maker is the use of dried lemon, which has a really distinct flavor that is, at least for this product, something that’s really memorable. What it seems to have is the flavor of both lemon juice and peel, which is more on par with what you’d get if you added lemon to freshly made iced tea.

However, in the case of both flavors, it is hard, as we pointed out at the start of this review, to really taste a direct benefit of the cold-brew process. We’re not sure if that’s because of how the product is made -- or if there simply isn’t that big of a flavor benefit to using this approach. And if there’s a final thought about the liquid it would be to continue to develop flavors that are as memorable as the Lemon variety -- it’s really top notch.

On the outside, this product uses a 15.9 oz. plastic bottle and sleeve wrap that’s similar to other products from ITO EN. It feels technical and somewhat serious in style, although the Matcha LOVE logo itself is playful and inviting. And we do think that the prominent placement of “ice-steeped” and “cold brew” are good things that make it super easy to understand the value proposition. Still, our bar for this brand is the design of the Matcha LOVE cans, which have a really nice look that has visual pop. We’d love to see their bottled products take cues from this a bit more than they currently do.

Overall, this is a nice extension of the Matcha LOVE brand and one that seems like a good direction for this brand to head in. We think there’s an untapped opportunity for cold-brew tea and this feels like a product that can, despite the differences being this and hot-brew being somewhat nuanced, create some level of traction behind it.