Mother Kombucha is a line of small batch “living teas” that are produced in Florida and are available in both keg and bottled format. For the purposes of this review, we’re taking a look at their five flavor RTD lineup, which includes four kombucha varieties and a fifth variety that’s a switchel. 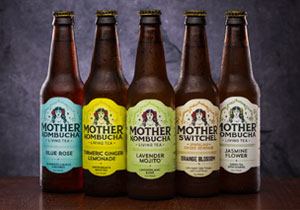 Let’s start with the kombucha offerings. All four of the flavors, which include Jasmine Flower (jasmine green tea), Turmeric Ginger Lemonade (white tea), Lavender Mojito (green tea), and Blue Rose (green tea and rooibos), have a few things in common including a mellow flavor profile that’s lightly sweetened (40 calories and 8g of sugar) and crisp in its finish.

It should be noted that these drinks have no vinegar or fermented flavor to speak of, so they drink very much like herbal or tea-based sodas rather than kombucha. That’s an accomplishment, and it means the company’s formulations will immediately stand apart from the majority of kombuchas out there.  These products are also loaded with great ingredients and all of the flavors come from real ingredients, as opposed to flavorings.

Lastly, there’s Orange Blossom, which is the switchel offering. This product, which doesn’t contain tea or kombucha, is a blend of water, orange blossom honey, apple cider vinegar, and ginger. Compared with other switchel products that we’ve had (and the few that have gone carbonated), this product is lighter and more honey-centric than the others. The apple cider vinegar and ginger are extremely subtle, resulting in a rather soda-like flavor. It’s good, but we’d love to see more of these two flavors.

Mother Kombucha’s packaging and positioning seem to take a nod from both craft soda and craft beer. Packaged in a 12 oz. longneck amber bottle, these products take a much more restrained approach in how they market their potential health benefits (you won’t find mention of the probiotic strains or CFU counts, for example). It’s hard to say if this specific copy really matters, but we do wonder if being in what is effectively a beer/soda bottle undermines its “good for you” appearance. Furthermore, we wonder if the switchel is something that should be a part of this line as it takes away from the focus of the brand.

In the end, there’s definitely a lot to like about what Mother Kombucha has created. These products are uniquely formulated, allowing the tea and other ingredients to really shine without having to be loaded with sweetness. While we think there’s room for improvement and evolution, it seems like a nice foundation and point of differentiation to build around.