We've been big fans of RISE Brewing Company since we first tried their nitro draft cold brew in early 2017. And today, despite there being a seemingly never ending sea of competitors, it's still one of the best cold brew coffees on the market. 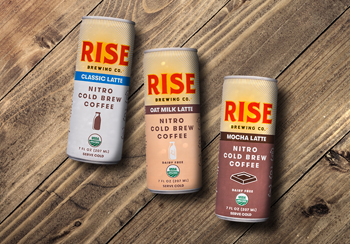 Its more recent offerings, which included a pair of citrus flavored nitro cold brews, were well executed but niche (similar to the way that other companies have tried to create cold brew sodas). Being honest, we started to wonder if they could ever create something that would come even close to their flagship product.

Now, in summer 2018, they've managed to create something that can hold its own -- and is perhaps even better than -- the original that we fell in love with. There are three new flavors, Mocha Latte, Oat Milk Latte, and Classic Latte, each of which is packaged in a 7 oz. slim can with a widget that allows the products to be shelf-stable but still have an authentic nitro experience.

Two of the three flavors, Mocha Latte and Oat Milk Latte, are oat milk based, while the third, Classic Latte, is dairy based. Speaking purely from a taste perspective, the oat milk offerings are truly something special. There’s no compromise in losing the dairy and you really cannot taste the oat milk when consuming the products cold (at room temperature, it’s pretty easy to taste). The addition of rich and indulgent chocolate in the Mocha Latte only furthers this. The Classic Latte is a really tasty product too, but it lives in the shadow of the oat milk products which are the winners for us.

That being said, having two oat milk-based SKUs alongside a single dairy-based SKU is an approach that we haven’t seen before. This, at least in theory, gives RISE an offering for consumers seeking a plant-based offering as well as those who just want the classic dairy-based latte. It lets innovation ride alongside the traditional recipe, which is certainly a great product in its own right.

However, we see an issue with this:: both oat milk products are vastly superior to the sole dairy based offering yet they are, by virtue of one being called Classic and the other being labeled as “Oat Milk,” positioned as slightly inferior or compromised. The Mocha Latte, which downplays the dairy-vs-oat-milk labeling, is closer to what we’d like to see across the line. But right now the current approach is a bit confusing to the point where we think it might muddy the waters for the consumer who is looking at all three on a shelf or in a cooler.

That said, what we’d love to see is the approach used for Mocha Latte used on a “Classic” or “Original” Latte that’s made with oat milk. We have a hard time believing that someone who is likely to consume an RTD nitro latte is going to read the label seeking out dairy or be disappointed by the use of oat milk -- especially when it tastes as good as it does.

Overall, RISE has done a tremendous job with these products. Putting the dairy vs oat milk debate aside, these are some of the best tasting RTD coffee products that we’ve had all year.