Suja, which is a leading brand of organic HPP beverages (and part of Coca-Cola’s investment portfolio), is using this product line to expand into one of the more nascent beverage categories: drinking vinegars. 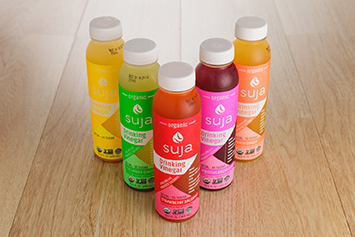 For this effort, they’ve married apple cider vinegar with juice, probiotics, and water. And they’ve added a bit of stevia (and coconut nectar) to help with the sweetness. The line is launching with five flavors that have between 20 and 30 calories per bottle (and 4g - 6g of sugar) and a light but tart and tangy flavor. They also have 4 billion probiotic cultures, which is another marketable benefit.

As for the individual flavors, the standouts were Cucumber Ginger, Lemon Cayenne, and Peach Ginger. The other two, Hibiscus Ancho Chile and Strawberry Balsamic, have flavors that were a bit more assertive. Not that there’s anything bad or off about these -- we just prefer the slightly lighter flavors of the other varieties.

Packaging is bright and busy looking, but the key elements, including “organic,” the Suja logo, and the words “drinking vinegar” catch your eye very quickly on all of the labels. The 13.5 oz. bottle looks the part of an HPP beverage and fits with the Suja line, so consumers who are already familiar with those kinds of products will probably take note of the vinegars when they’re in the cooler at retail.

However, for those who are new to drinking vinegar, it seems like the messaging could be a bit more clear and focused. With the current design, there are a variety of things that are competing for your attention, especially on the bottle’s lower half. These include the ingredients, probiotics, certification badges, the flavor name, and a callout for sugar and calories. While all of these are meaningful things, we wish they were slightly easier to pan and quickly read than they are in their current form.

Still, as far as drinking vinegars are concerned (at least as of August, 2016), this feels like one of the more approachable and enjoyable options. Whether or not it will move the needle for Suja as a brand, we can’t tell, , but it will certainly create increased awareness -- and added legitimacy -- to the drinking vinegar category.

Overall, there’s definitely room for Suja to evolve and improve this line, but what they’ve come out of the gate with is quite enjoyable and definitely helps the continued message that Suja is a beverage innovator.