Announced in July 2017, Suja Kombucha, which is launching exclusively at Costco, is the company’s first entry into both kombucha and effervescent beverages.

For this review, we’re taking a look at three of the four flavors, including Ginger, Berry, and Peach (Green was not yet available). The products are USDA Organic and packaged in a 15.2 oz. glass bottle. Plus, these being products from Suja, they contain cold-pressed juice that ranges from 3 percent to 8 percent in terms of volume. 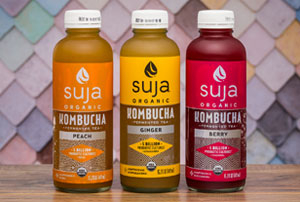 Now there’s a somewhat obvious comparison here between Suja, which is backed by Coca-Cola, and Kevta, which is owned by Pepsi. This product, much like Kevita’s Master Brew Kombucha, seems like it has its sights on the mainstream and conventional (it is launching at Costco, after all) rather than the natural channel as many upstart kombucha brands target. And the appearance as well as what’s inside the bottle will also certainly make for comparisons.

That said, this product is some worthy competition for Kevita. There’s also one key difference in that this product doesn’t use stevia, but rather opts for a sugar based formulation that results in 14g of sugar and 60 calories per bottle. Otherwise, Suja has done a really nice job crafting what we’d describe as crowd pleaser flavors. The flavors are clean and crisp and have only the slightest fermented note to their finish.

As with most kombucha products that we sample, the Ginger variety, which blends both lemon and ginger juices, is our favorite. The mild spice of the ginger and the bright citrus note of the lemon provide a really nice accent to the underlying kombucha base. The Peach variety, which contains peach, lemon, and ginger juices, follows a somewhat similar format although the sweet flavor of peach ultimately ends up being the primary flavor. Lastly, there’s Berry, which contains raspberry and blueberry. This is the most fruit forward of the trio that we sampled and probably a good starting point for those who are new to kombucha.

Packaging is definitely one of the stronger points for this product. It’s polished and clean, with the modern and chic look that you’ll find on all of Suja’s products. They’ve done a really nice job of adapting the brand to suit a variety of different product lines and this is no exception. And the label is really easy to read, with all of the key attributes stacked in a way that your eye can quickly scan it.

Ultimately, we feel as though Suja’s Kombucha offering is a very timely and well design product, both inside and out. Compared with some of their other more recent offerings, drinking vinegars, for example, this seems much more ready for primetime in that there’s an established and rapidly growing category that comes with it. We’re curious to see how it does, but we think they’ve really put their best foot forward with the product.