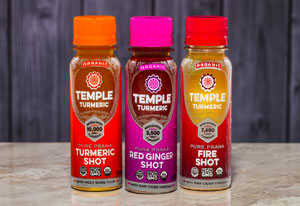 We’ve been fans of Temple Turmeric for a long time -- since before they were even Temple Turmeric -- and there’s one particular part of their product portfolio that we’ve always been fond of: their Pure Prana shot. This product offered their most intensely flavored formulation and really hits your palate hard with turmeric flavor.

Much to our excitement, Temple Turmeric recently announced that they were expanding the shot lineup to include three flavors: Turmeric Shot, Red Ginger Shot, and Fire Shot. Like all of Temple Turmeric’s products, these flavors are loaded with great stuff. Here’s a rundown of the three:

From a packaging and positioning standpoint, these products are the strongest of the Temple Turmeric lineup. The company, which is all about utilizing an intense ingredient (turmeric) and creating efficacious products, feels like the perfect player to be in the shot space. These products take that mission to its most direct and functional form and deliver flavor that is memorable, enjoyable, and addictive.

Given their size and perishable format, these may not be the easiest offerings in their market to bring to retail. Fortunately, Temple Turmeric has a solid set of other products to complement these shots. Plus, there’s a growing number of other companies that are trying to develop this refrigerated shot set. For Temple Turmeric, we think it’s really smart that they’ve created what amounts to almost  a miniaturized version of the packaging used on their flagship line. This allows the company to play in this nascent space while reinforcing their core mission and promoting their main product line.

Overall, these are some really incredible tasting and formulated products. We honestly can’t pick one as our favorite -- they are all great.