With the cold brew coffee category continuing to be flooded with new brands, what’s an existing purveyor of cold brew coffee to do to stay ahead of the curve? For some companies, the answers have been adding flavors, nitro infusions, or other different packaging approaches, all designed to make their coffee stand out. However, these, too, have been flooded with competitors, so many companies are again left trying to figure out new ways to innovate. 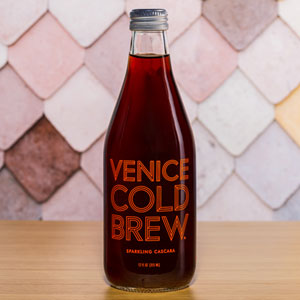 For Venice Cold Brew, that answer is coming in the form of something that is, at least at the time of this writing, a bit more bleeding edge: a sparkling cascara, made from the fruit (or “cherry”) that surrounds the coffee bean. A variety of companies, including Starbucks, are getting behind cascara, so it’s not something that Venice will be doing by themselves.

In the case of this offering, they’ve combined it with carbonated water and sugar to create something that is almost soda like. The product starts out with a very pleasant aroma, which has notes of coffee, chocolate, and cherry. It drinks slightly tart and bitter, but really doesn’t taste like coffee. The product has 16g of sugar (and 90 calories), which is modest as far as carbonated soft drinks go and, from a taste perspective, it seems spot on. The flavor is enjoyable and unique, but it’s a bit of an acquired taste.

On the outside, we think that they’ve created something that is visually clean and aesthetically pleasing. However, having a product as unique as a cascara that’s labeled with massive letters that say “COLD BREW” is somewhat confusing (even though it’s cold steeped) in that it implies a traditional coffee drink. Furthermore, we feel as though they need to better address certain aspects of the product, such as what to expect from the taste as well as the caffeine content.

Overall, we really like Venice’s desire to innovate and position themselves as a cutting edge brand. While there’s definitely room to improve the intuitiveness of this product, it’s a solid start and it is very nicely crafted. But in the end, we think the success of this product ultimately hinges on how much awareness and demand some of the larger players, such as Starbucks, can create for cascara.