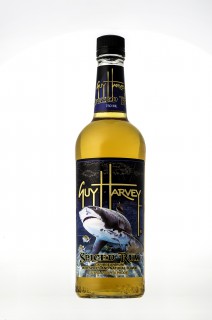 Renowned marine wildlife artist, scientist and conservationist Guy Harvey unveiled today his entry into the popular spiced rum market. Guy Harvey Spiced Rum was developed and launched together with Shaw-Ross International Importers, one of the spirits industry’s leading marketing and sales companies. In Florida, Southern Wine & Spirits of America, Inc. has been appointed as the wholesale distributor for the brand.

“Given the rich heritage of rum with sailors, boaters and fishermen, adding a quality rum product is a logical extension of my lifestyle brand” said Guy Harvey. “We are also extremely pleased with being able to partner with industry leader Shaw-Ross on this project.”

Distilled in the Caribbean, Guy Harvey Spiced Rum is an amber colored spiced rum that contains spices and warm flavors of vanilla, nutmeg and cinnamon.

It is 35 percent alcohol by volume (70 proof) making it very pleasant on the tongue with a long, smooth finish. It will retail at approximately $15 per 750ml bottle.

“The Guy Harvey name is a perfect fit for spiced rum,” notes Bruce Hunter, Managing Director of Shaw-Ross International Importers. “Additionally, rum is a growing category and spiced rum in particular is the driving force behind this growth so the timing is right for the launch of Guy Harvey Spiced Rum. We are very excited.”

Guy Harvey Spiced Rum is ideal for consuming on the rocks, with cola, lemon-lime soda or juices. It will also be actively promoted in a version of a traditional rum cocktail known as the Shark Bite. The cocktail consists of 3/4 ounces Guy Harvey Spiced Rum, 3/4 ounces light rum, 1/2 ounce blue curacao,1 1/2 ounces sweet and sour mix and 3 drops of grenadine.

Initial distribution has begun in Florida. Plans to take the product to markets outside of Florida in 2015 are currently in the works.

Additionally, a second Guy Harvey branded rum offering, an aged blended Jamaican rum, is in development and is expected to be introduced in the spring of 2015.

A significant portion of the net proceeds from Guy Harvey Spiced Rum will be used to fund the various projects of the Guy Harvey Ocean Foundation, a non-profit that funds scientific marine research and conservation programs.

In particular, the proceeds from Guy Harvey Spiced Rum will fund marine science and outreach programs.

Guy Harvey is a marine wildlife artist and conservationist who earned a Ph.D. in Fisheries Biology. His depictions of marine life, especially of sportfish such as marlin, are very popular with sport fishermen and have been reproduced in prints, posters, t-shirts, jewelry, clothing, and other consumer items. Harvey is also a very vocal and active advocate for marine conservation, having established the Guy Harvey Research Institute at Nova Southeastern University of Fort Lauderdale, Florida as well as the Guy Harvey Ocean Foundation, an organization that funds marine conservation research and educational initiatives.

Shaw-Ross International Importers was founded in 1968 as a boutique wine and spirits importer representing a handful of brands in the United States.

Since then, Shaw-Ross has grown into one of the nation’s leading importers representing twenty eight suppliers from around the world. For more information, visit www.shawross.com