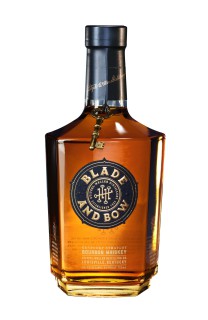 LOUISVILLE, Ky., May 12, 2015 /PRNewswire/ — Generations of distillers along Kentucky’s bourbon trail have poured decades of time into perfecting the art of making whiskey in distilleries that have since become the place of legend.  Blade and Bow Kentucky Straight Bourbon Whiskey, DIAGEO’s newest brand within its American Whiskey portfolio, pays homage to the artful passion and renowned craftsmanship of the celebrated Stitzel-Weller Distillery in Louisville, Kentucky.

Named after the two parts of a skeleton key, the blade shaft and the ornate bow handle, Blade and Bow Kentucky Straight Bourbon Whiskey derives its inspiration from the Five Keys symbol that can be found throughout the Stitzel-Weller Distillery. Representing the five steps of crafting bourbon – grains, yeast, fermentation, distillation and aging – these keys have grown to symbolize the southern traditions of hospitality, warmth and enjoying the finer things in life.

“From the delicious hint of dried apricot and ripe pear found within Blade and Bow Kentucky Straight Bourbon to the 22-Year-Old Limited Release’s pronounced nose of toasted oak layered with vanilla bean, figs and a light touch of dark caramel, both whiskies exhibit the same craftsmanship that was upheld amongst distillers at Stitzel-Weller long ago,” said DIAGEO North American Whiskey Ambassador Doug Kragel. “The inspiration for Blade and Bow’s creation resonates with my personal passion for whiskey, and I can’t wait for others to have the opportunity to responsibly enjoy these great products.”

Blade and Bow 22-Year-Old Limited Release Kentucky Straight Bourbon Whiskey (92 proof, 46% ABV) won Double Gold and was awarded the title “Best Straight Bourbon” at the 2015 San Francisco World Spirits Competition. Inclusive of whiskies distilled at both the distillery historically located at 17th and Breckinridge in Louisville, Ky. and the distillery historically located at 1001 Wilkinson Blvd. inFrankfort, Ky., this limited release offering was most recently aged and bottled at Stitzel-Weller.

The release of Blade and Bow Whiskey will be supported by trade and consumer advertising, public relations, digital extensions and point of sale materials. The brand will also utilize DIAGEO’s Masters of Whiskey program and participate in whiskey festivals across the country.

Consumers are encouraged to responsibly enjoy Blade and Bow Whiskey neat or on the rocks.

About Diageo
Diageo is a global leader in beverage alcohol with an outstanding collection of brands across spirits, beer and wine categories.  These brands include Johnnie Walker, Crown Royal, JεB, Buchanan’s, and Windsor whiskies, Smirnoff, Cîroc and Ketel One vodkas, Captain Morgan, Baileys, Don Julio, Tanqueray and Guinness.

Diageo is a global company, and our products are sold in more than 180 countries around the world.  The company is listed on both the London Stock Exchange (DGE) and the New York Stock Exchange (DEO).  For more information about Diageo, our people, our brands, and performance, visit us at www.diageo.com.  Visit Diageo’s global responsible drinking resource, www.DRINKiQ.com, for information, initiatives, and ways to share best practice.