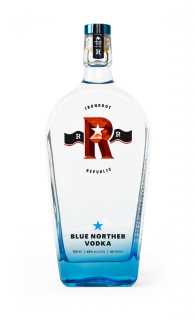 Following unfulfilling career stints in engineering and law respectively, IronRoot Republic Founders and Distillers Jonathan and Robert Likarish decided to pursue their dream of opening a craft spirits distillery. The brothers cut their teeth studying under some of the most well-respected distillers in the industry including Hubert Germain-Robin, Dry Fly Distilling’s Don Poffenroth, and Balcones founder Chip Tate. “Jonathan and I set out to learn the art of craft spirits distillation from the best in the business so we could create the most modern, sophisticated and high quality products,” said Co-Founder and Distiller Robert Likarish.

“It was also important for us to stay true to our roots, running our business out of North Texas and developing relationships with local farmers and vendors,” added Co-Founder and Head Distiller Jonathan Likarish. “By sourcing nearly all of our ingredients locally and personally overseeing the entire distillation process on-site at our distillery, we knew we could confidently produce the best spirits in Texas.”

When determining a location for their distillery, the Likarish brothers selected Denison, TX, located 90 miles north of Dallas. The town already boasted a rich wine history and is the sister city of Cognac, France. Coupled with the locals’ enthusiasm over welcoming the distillery, the brothers felt the location was a natural choice.

As a tribute to the town, the brothers decided upon the name IronRoot Republic, which honors Denison’s history and the legacy of famed citizen and horticulturist Thomas Volney Munson. Following a phylloxera epidemic in the 19th century, which decimated the wine grape crop in Europe, Munson pioneered methods in creating disease-resistant vines. Munson’s work was instrumental in restoring the wine grape population in that region and earned him induction into the French Legion of Honor.

The Likarish brothers utilize a traditional European double distillation process, typical of the Scottish and French, as opposed to more popular American hybrid practices. They personally guide each batch through the aging process, starting them off in new barrels and progressively moving them to older barrels. They also taste and monitor their spirits at every stage. 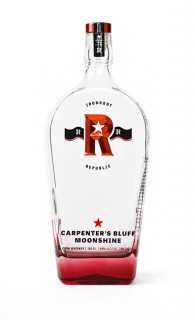 IronRoot Republic Distillery currently produces two brands. Their Blue Norther Vodka, named after the unique weather patt­ern that stretches across the Texas sky, is created using a non-chill filtration process made from the finest hand-selected Texas grains. Blue Norther has a unique flavor derived from caramel wheat malt. The vodka’s crisp citrus and caramel essence is followed by honey sweetness and a rich, silky mouth-feel. It is full-bodied with a long, vanilla finish. Blue Norther is an 80 proof vodka with a suggested retail price of $25.

Carpenter’s Bluff Moonshine is Texas corn whiskey at its finest and is sure to become as infamous as the bootlegging bridge for which it was named. Made from rare heirloom red corn, the moonshine invokes hints of fresh honeydew, white peach, and dragon fruit, followed by lychee nut, dark berries and a lingering sweetness. The spirit is 90 proof and retails for $25.

IronRoot Republic has several other brands in the works, including Texas Drought Gin, which is made from hand-picked Texas juniper and will debut in late spring 2015. Also, the Likarish brothers are eager to introduce their Texas Whiskey, a true labor of love. They have produced an incredibly aromatic and high quality whiskey and are patiently waiting for the first 60 full-sized barrels to complete the aging process. Additionally, the Texas Orange Muscat brandy is slated to hit shelves by the end of the year.

All IronRoot Republic brands are bottled in a distinctive and custom designed 750 ML bottle. The packaging is a reinterpretation of the shoo-fly flask, a style which gained popularity in the late 19thcentury. IronRoot Republic products are distributed by Glazer’s, one of the nation’s largest distributors of wine, spirits and malt beverage products.  Blue Norther Vodka and Carpenter’s Bluff Moonshine are currently available for purchase at IronRoot Republic Distillery, as well as Dallas-Fort Worth and Denison area retail locations. Plans for future expansion are underway.

IronRoot Republic is a craft spirits distiller with a grain to glass concept. Premium brands Blue Norther Vodka and Carpenter’s Bluff Moonshine are made from fresh, local and non-GMO ingredients. Ninety percent of the ingredients used in IronRoot Republic brands grow within a 60 mile radius of the distillery. IronRoot also mashes, ferments, distills, barrel-ages and bottles onsite at their Denison, TX facility. IronRoot is planning future launches for Texas Drought Gin and a brandy made from Texas grapes. For more information, please visit the website at www.ironrootrepublic.com, Facebook page atwww.facebook.com/ironrootwhiskey or Twitter page at www.twitter.com/ironrootwhiskey

Glazer’s, one of the country’s largest privately held companies, currently operates in 15 states, Canada and the Caribbean, and is one of the nation’s largest distributors of wine, spirits and malt beverage products.  The company has operations in Alabama, Arizona, Arkansas, Illinois, Indiana, Iowa, Kansas, Kentucky, Louisiana, Mississippi, Missouri, Ohio, Oklahoma, Tennessee, Texas, Canada, and the US Virgin Islands.  The third-generation family business was founded in Dallas in 1933.  For more information, please visit our website at www.glazers.com.