Eager to display a side rarely seen, Jagermeister has tapped NY-based ad Agency Deutsch to create a campaign that focuses on Jagermeister’s rich heritage, 56 premium ingredients sourced from all over the world and the brand’s complex production process in a unique and unexpected way. The favorite shot of millions and iconic brand is inviting consumers to explore more than the mystery and lore that typically surrounds Jagermeister.

Three talented illustrators with the same level of passion for craft, Artists Olivia Knapp, Yeahhh! Studios and DKNG, were tasked to create three unique illustrations that stem from the brand’s pillars – heritage, ingredients and process. The illustrations were then built into massive wooden works-of-art measuring over 6 feet in length, inspired by the large oak barrels in which each batch of Jagermeister is aged for one year. 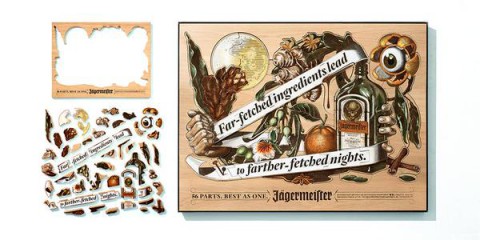 Each art piece is meticulously constructed from 56 separate, intricately cut, carved, etched, sanded, lacquered, varnished and hand-painted wooden parts — fashioned together like a puzzle, just as the complex ingredients of Jagermeister come together to create a perfectly balanced taste and one of the top selling premium spirits brands in the world.

“Jagermeister has a fascinating and unique history that many are unaware of,” said Marcus Thieme, Jagermeister’s Regional Director North America. “Inspired by the legend of St. Hubertus, Jagermeister’s secret recipe is comprised of 56 different ingredients, ages in oak barrels for a year and undergoes 383 quality checks. The wood carvings created for this campaign are an extra effort that represents the unmatched care that goes into making Jagermeister with an execution as unique as the brand itself.”

“It has been great to work with a brand that embraces the same principles and high standards for their product as we do for ours,” said Deutsch NY ECD, Head of Art and Design Menno Kluin. “This campaign takes art direction to an insane level. We believe the work will really resonate with consumers who are passionate about understanding the roots of today’s brands.”

Launching nationwide, in 12 metropolitan cities, with out-of-home, painted wallscapes, rich media, print, mobile and social media. “56 Parts. Best as One” is a campaign that’s as well-crafted as the ingredients inside the bottle.

Jagermeister, which translates to “master hunter,” is the #1 selling imported liqueur in the United States and one of the top shot brands in the world. The full-bodied flavor of Jagermeister, which includes cinnamon, star anise, ginger and cardamom, is a result of a lengthy maceration to extract aromatic compounds from a closely guarded recipe of 56 herbs, roots, blossoms and fruits, plus aging in oak casks for one year. The production process is exacting and includes sourcing the ingredients in their raw, unprocessed form, along with 383 quality checks to ensure its iconic taste profile.  Jagermeister Liqueur is 35% Alc. /Vol. and imported exclusively by Sidney Frank Importing Company, Inc., New Rochelle, NY. Visit www.jager.com or www.facebook.com/JagerUSA for additional information. DRINK RESPONSIBLY.