PLEASANTON, Calif., March 24, 2015 /PRNewswire/ — MEDEA, Inc., the producer of the award-winning, ultra-premium vodka with the world’s only customizable LED message band built onto the bottle, is pleased to announce the launch of its new Bluetooth technology on all MEDEA Vodka bottles beginning June 2015. This new technology will be showcased at the Nightclub & Bar Convention & Trade Show, in the Emerging Brands Pavilion, (Booth 1415) in Las Vegas, March 31-April 1, 2015.

The world’s first “message on a bottle” is once again leading the spirit technology sector allowing consumers direct access to the bottle’s technology through their wireless devices. Paired with the new Bluetooth technology is a MEDEA App which was developed in-house by the MEDEA technology team. 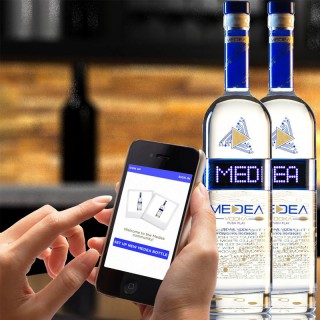 The MEDEA Vodka LED bottle uses Apple’s iBeacon Bluetooth technology in an innovative way to allow a smart phone to wirelessly set and display scrolling messages. The MEDEA App is able to immediately know what bottles are in the vicinity without having to connect or find every Bluetooth-enabled device. This cuts discovery from minutes down to seconds. The MEDEA App knows at all times which bottles are on, available to be registered, and are ready to receive instructions for setting and displaying messages.

The community aspect of the MEDEA App speaks to the very foundation of sensible consumption and having fun with friends. The ability to share a conversation among friends, through bottles, brings this groundbreaking technology into the social realm. Not only can you share access to your MEDEA bottle with friends to change, modify or add messages, but, users will also be able to directly post to their social media applications, including Facebook, Twitter, and/or personal email accounts. By connecting to the nearest unregistered bottle in range, the App ensures that only you and those with whom you are sharing your personal bottle have access. Once registered to your phone, the bottle cannot be accessed by another.

The new MEDEA App seamlessly programs the bottles, and allows consumers to literally have a “say” in what they are drinking. Users, on- and off-premise establishments, and brands alike, can program messages from social to marketing-centric content to fit every occasion. The bottle is pre-programmed with six familiar phrases such as, “Happy Birthday,” “Congratulations” and “Thank you,”  that crawl across the label in electric blue. Owners can program their bottle to say whatever they want—or can’t. Such as, “I love you;” or “Will You Marry Me?” or, maybe just “Let’s Party!”   For the on-premise market, suffice it to say there is no back bar display like it.

About MEDEA
MEDEA is an ultra-premium vodka, distilled with pure artesian water in Schiedam, Holland, at one of the most respected distilleries in the world. MEDEA is distributed through Young’s Market Company on the West Coast, in California, Washington, Arizona and Hawaii. MEDEA is also available in select stores in New York and New Jersey, British Columbia, Mexico, Columbia, France, Australia,Switzerland and the United Kingdom.