PR Newswire – Norwalk, Conn. (October 21, 2015) – SMIRNOFF® vodka, the world’s best-selling vodka that welcomes everyone in, returns with the second iteration of the Exclusively for Everybody campaign to celebrate the idea that good times are more fun when everyone is included.

In the next Exclusively for Everybody campaign, actors and comedians, T.J. Miller and Thomas Middleditch, journeyed an epic 3,098-miles from Los Angeles to New York Comic Con in “The Road Trip” to pitch a film idea starring superheroes that aren’t cut from the same Hollywood cloth. Documenting the adventure, the SMIRNOFF® brand created a series of six broadcast and online films for “The Road Trip,” sharing how T.J. and Thomas learned about the quality of SMIRNOFF® vodka during stops along the way at a comedy club, farm-to-table restaurant, house party, and, finally, in a safe carpool ride. 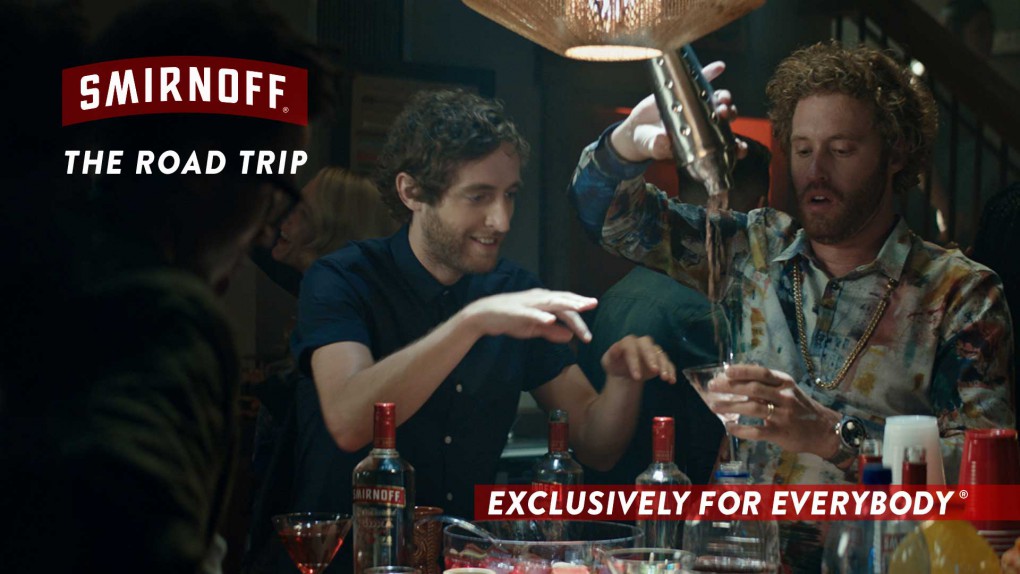 “Last year, we brought a fresh voice to vodka and broke through some of the pretentious characteristics the category has come to be associated with,” said Brian Radics, SMIRNOFF® Brand Director. “This year we wanted to further heighten that message and seek out moments that are made even better by including everyone. As a brand, we were excited to learn that T.J. and Thomas share our beliefs so much that they would join us to spread the message of inclusivity with everyone.”

True to the films, T.J. and Thomas surprised guests at the kickoff day of New York Comic Con on Thursday, October 8 to shout, via bullhorn, to hundreds of fans that everyone is a superhero. SMIRNOFF® vodka then brought the good times to more than 400 New York Comic Con attendees aged 21+ with a celebration that united all kinds of superheroes together over cocktails and Moscow Mules.

“We went to New York Comic Con to pitch a superhero movie starring us, Emo Boy and my crime-fighting partner, Goldperson, because we believe that every single person has their own super power,” explained Thomas Middleditch. “This was an awesome ending to our road trip in the Exclusively for Everybody campaign as we got the chance to hang out with real fans and heroes at New York Comic Con, celebrate the unique qualities of everyone, use a bullhorn, and enjoy Moscow Mules made from a good quality vodka.”

“It’s time we recognize the superheroes we all are,” stated T.J. Miller, heroically. “We don’t have to be big, muscle clad, unusually handsome, men to be super or heroes! Look at me and how awesomely weird Goldperson looks. This belief that everyone is welcomed in is what Thomas and I love about being involved in the SMIRNOFF®brand’s Exclusively for Everybody campaign, and is something we don’t often see enough anymore.”

The new Exclusively for Everybody campaign, “The Road Trip,” kicked off on October 5, 2015 with the teaser film “3,098 Miles to New York Comic Con” and social content from T.J. and Thomas throughout the week. Highlighting the people, places and spaces that speak to SMIRNOFF® vodka, T.J. and Thomas’ journey is revealed through core films, including “3,098 Miles to New York Comic Con,” “Reminiscing,” “Farm to Table,” “Safe Rides, Sharing Rides,” “What Kind of Night Is It?” and “We’re Here.”

Throughout the series, T.J. and Thomas show how good times are better by welcoming everyone in, and most importantly, they remind everyone to enjoy SMIRNOFF®vodka responsibly. In the “Safe Rides, Sharing Rides” video, T.J. and Thomas end up in a carpool, embrace their fame with new friends, and get everyone home safely.

Created by 72andSunny’s New York office, the creative will be brought to life through a fully integrated campaign across broadcast, social, and digital platforms. For more information on the SMIRNOFF® Exclusively for Everybody campaign and the “The Road Trip,” please visit www.smirnoff.com, tune in to www.youtube.com/smirnoffUSor become a fan of the “Most Liked” vodka brand at www.facebook.com/smirnoff. Be sure to check out our DIY cocktail ideas on www.pinterest.com/smirnoffUS.

About SMIRNOFF
The SMIRNOFF brand, the world’s number-one selling premium spirit and the top-selling vodka by volume, in the United States, traces its heritage back to 19th century Russia. As the most awarded vodka brand in the world, SMIRNOFF has always been known for quality and is enjoyed responsibly in 130 countries around the world. For more information, log on to www.smirnoff.com.

Diageo is a global company, with its products sold in more than 180 countries around the world. The company is listed on both the New York Stock Exchange (DEO) and the London Stock Exchange (DGE). For more information about Diageo, its people, brands, and performance, visit us at www.diageo.com. For our global resource that promotes responsible drinking through the sharing of best practice tools, information and initiatives, visit DRINKiQ.com.

About New York Comic Con
New York Comic Con, organized and produced by ReedPOP, is the East Coast’s biggest and most exciting popular culture convention with the latest and greatest in comics, graphic novels, anime, manga, video games, toys, movies and television. New York Comic Con’s panels and autograph sessions give fans a chance to interact with their favorite creators, while screening rooms feature sneak peeks at films and television shows months before they hit either big or small screens. It is the ultimate pop culture convention in America and the only one that takes place in the comic book, publishing, media and licensing capital of the world – New York.