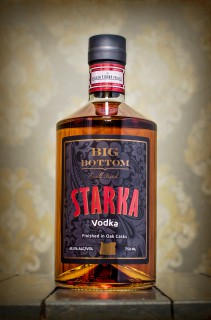 HILLSBORO, OR – (April 23, 2015) – Big Bottom Distilling has released its first vodka, which is the result of the Oregon Starka Project.  The project is a collaborative effort between three Oregon distillers: Big Bottom Distilling, Bull Run Distilling and Indio Spirits and Distillery.  The Big Bottom Starka Vodka, ABV 91 proof, is produced in small batches and is finished in oak casks. It’s sold statewide in limited quantities and batches will be released annually as a seasonal product.

Starka is a traditional aged vodka that dates back to the 15th century in Eastern Europe.  Tradition had it that at a child’s birth, the father would pour large amounts of homemade sprits into an empty oak wine barrel and bury it in the ground only to be dug up and consumed at the child’s wedding.  Although there was no actual child involved, the birth of the Oregon Starka Project took place in 2014.

The participating Oregon distillers wanted to offer a unique twist to Starka and market all the products together as a collaborative effort – the Oregon Starka Project.  Each distiller has created an exclusive variation of Starka by choosing specific barrels that are distinct to each producer.  The result is three remarkable Starkas that offer a fresh old twist to the world of vodka.  They are sold throughout Oregon for $29.95.

This project is an example of how Oregon distillers support each other, says Big Bottom Distilling Owner Ted Pappas.

“Oregon distillers don’t see each other as competition,” he noted.  “There’s a real sense of support amongst each other and each other’s products.  It’s about promoting ‘Brand Oregon’.”

Big Bottom Distilling, LLC Founder and President of the Oregon Distiller’s Guild, Ted Pappas, started the company in 2010. As a 1991 graduate of The Citadel, The Military College of South Carolina, all of Pappas’ products are proofed at 91° as a tribute to his classmates. The company started as an independent bottler with the release of several Big Bottom Whiskey and Calhoun Bros. straight bourbon and rum products. Big Bottom products retail from $21.95 to $44.95 and are sold in Oregon, Washington, California, Nevada, Illinois, Georgia and South Carolina.

The company ventured into distilling in July 2014 with its 100-gallon all-copper still, which allows for production of a wider range of spirits. Big Bottom also expanded by adding 1,500 square feet of barrel storage to its production, warehouse, and tasting room space. The Big Bottom tasting room is located off NW Cornelius Pass Road on NW Nicholas Court and it is open Saturdays from noon to 4 p.m. or by appointment. For more information, please visit www.bigbottomwhiskey.com or call (503) 608-7816. You can follow the company on Facebook at: https://www.facebook.com/BigBottomWhiskey and Twitter@bbdistilling.