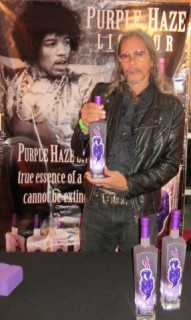 Jimi Hendrix was arguably the greatest instrumentalist in the history of rock music. He understood the full range of sound of the electric guitar, and was able to experiment into different areas of rock music that no other musician had done before. Hendrix’s music was unique, ethereal and transformative. Jimi Hendrix’s fame allowed him to usher in a new era of music, creating an impact upon rock music as a whole that continues to be felt.

Tiger Paw Beverage Company’s portfolio will commence their initial launch this Summer 2015 in the United States and export markets. The launch will promote the true essence of ‘Purple Haze’ spirits beverages with premium qualities of exotic berries, cognac and vodka ingredients, which are all 34 proof. The portfolio of ‘Purple Haze’ additional unique flavors will be launched in key target markets, expanding on the well known Jimi Hendrix songs, imagery and media focused events.