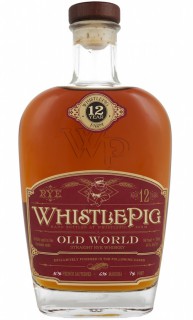 SHOREHAM, VT–(Marketwired – Jun 23, 2015) –  WhistlePig is proud to announce that its newest permanent expression, the Old World, will soon be available across the United States. The Old World combines the boldness of American rye with an elegance imparted from the finest European Sauternes, Madeira and Port oak wine casks.

“WhistlePig’s Old World delivers an exquisite balance of flavors through its unprecedented aging process and careful finishing in the highest quality wine casks,” said WhistlePig Founder and CEO Raj Peter Bhakta. “This new release is the culmination of years of innovation at WhistlePig.”

The series debuted with the Sauternes finish, making WhistlePig the first company to age American rye in casks from this highly rare, sweet white wine. The Madeira finish was inspired by America’s first President, George Washington, who was a passionate drinker of Madeira wine and also a distiller of rye whiskey himself. The port finish combines the bold taste of rye with the sweetness of the Portuguese wine, perfectly combining the old world with the new world.

WhistlePig then carefully married the three whiskeys into the Old World, highlighting their distinct flavors to create an exceptionally balanced spirit. This ultra-premium straight rye is distinctly American, yet harkens back to its stately Old World roots.

“The result is a new form of America’s first and boldest spirit, rye whiskey, with the essences of Madeira, Sauternes, and Port, adding a level of complexity and refinement that is rare in a whiskey,” said Dave Pickerell.

The Old World comes from a mash of 95% rye and 5% malted barley and has a suggested retail price of $117.99. Barrel-finished and bottled by hand at 86 proof on the WhistlePig Farm, the Old World Series won the 2015 Double Gold Award for best rye at the 2015 San Francisco World Spirits Competition.

Tasting notes for the Old World

About WhistlePig
WhistlePig is the premier aged rye whiskey, featuring the bold and often untapped flavor of rye. Founded by Raj Peter Bhakta with the help of legendary master distiller Dave Pickerell, WhistlePig is leading a surge of innovation in the emerging field of North American whiskey. As the most decorated rye whiskey — having received a record 96 points from Wine Enthusiast — WhistlePig is widely viewed as the world’s finest rye. With the opening of its distillery on its 1,300-acre Vermont farm this summer, WhistlePig will become the leading grain-to-glass rye whiskies in the world.