PORTLAND, Maine — April 21, 2016— On Thursday, April 28, a new craft beer spirit — the first of its kind to be released in limited supply — will be available at six locations in southern Maine. Sebago Brewing Company and Liquid Riot Bottling Company partnered to unveil Bonfire Spirit, a 90-proof “whiskey-style” spirit made from distilling Sebago’s Bonfire Rye Ale and aged in charred oak barrels for two years.

“The idea came from a conversation three years ago with Eric Michaud,” said Kai Adams, co-founder of Sebago Brewing. “It’s been a long wait, but we’re extremely excited for people to finally try this ‘whiskey’ — it’s truly unique to Maine’s craft beer and distilling landscape.” 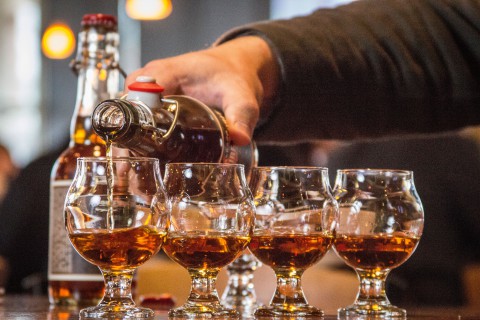 Bonfire Spirit, which is 45 percent alcohol, looks and tastes like whiskey, but doesn’t meet the federal definition of whiskey. Distilled just once a year and barrel-aged for two, the first batch produced a total of 200 12-ounce bottles that will be available in limited supply at Sebago’s four brewpubs, Liquid Riot Bottling Company and Novare Res (both in Portland and owned by Michaud). Customers will have the opportunity to purchase this special distillate. More of the spirit will be released in August alongside Bonfire Rye Ale’s next release.

“It’s these kinds of partnerships and collaborations that make what we do fun,” said Michaud. “Much of our business has been built on collaborating and figuring out a way to make something different. The fact that we can offer this limited supply spirit to our customers is extremely rare.”

Bonfire Spirit will be available starting April 28, while supplies last. The first batch of 200 bottles is not expected to last for more than a few days.

Sebago Brewing Company poured their first beer at the original Sebago Brewing Company brewpub in 1998. Today, the brewery is honored to be a local Maine favorite, known for their commitment to community, great staff, and creative craft beer and food. Sebago’s brewery staff brews and cans the entire lineup of beer, which is available all over New England, and are constantly working to brew consistent and quality beers that push the boundaries of craft beer.Learn more at sebagobrewing.com.

Liquid Riot’s roots date back to 2001 when Eric Michaud’s home-brewing filled his parents’ basement in Yarmouth, Maine, with batch after batch of newly created beers. Today his passion for brewing authentic beers and distilling unique spirits pairs perfectly with the great food served at Liquid Riot Bottling Company, opened in 2013. Liquid Riot’s mission is to share the passion for brewing and distilling and to educate curious customers about the art of transforming ingredients into exceptional beers and spirits. Liquid Riot is named for the Portland Rum Riot and Chicago Beer Riot, both in 1855. Other Liquid Riot spirit brands include the “Old Port” lineup of Rye, Single Malt, Bourbon, and Oat whiskies, as well as Old Port White Oat Whiskey, Well… Vodka, Rhum Blanc, and Dow’s Demise Aged Rum, available at select bars and restaurants in Maine and at Liquid Riot’s resto-bar.Liquidriot.com.