HOUSTON, TX (PRWEB) SEPTEMBER 20, 2016 — The new custom cylindrical shaped bottle embossed with the Yellow Rose logo stands slightly taller, in order to maximize visibility on liquor store shelves and back bars. A refined labeling strategy makes it easier to distinguish the different products in the Yellow Rose line-up, and prominently highlights the brand’s Texas roots. Bottles will still include the traditional batch and bottle numbers, now easier to see on the front label. All new custom top straps and closures accentuate the premium package design. 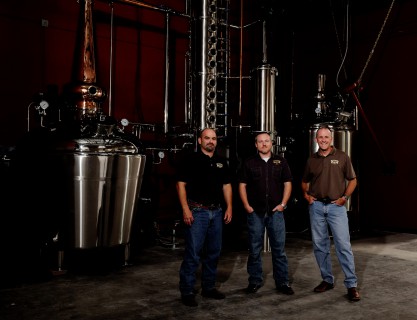 In addition to its award-winning Bourbon, Rye and Blended whiskeys, Yellow Rose is debuting three new products this fall:

Maple Finished Rye Whiskey – High rye whiskey that is finished in used bourbon barrels previously used to age maple syrup. The finishing ads a hint of maple while smoothing out the edges of the whiskey. Allocation is limited to only 250 nine liter cases in 2016.

Premium Collection No. 1 Bourbon Whiskey – This is the first of several planned annual releases of special whiskey. Each collection will use a different whiskey and finishing technique. For Collection No. 1, selected bourbon casks were finished in port barrels for up to six months. Allocation is limited to only 500 nine liter cases in 2016.

Since Yellow Rose’s 2010 founding, each two years have marked a significant milestone in the company’s growth. Outlaw Bourbon officially debuted in Texas in 2012, and in 2014 Yellow Rose opened a 10,000 square foot production facility and tasting room in the Spring Branch area of Houston.

“Over the past few years we have listened to customers’ suggestions and requests, including those from retail establishments, bars and restaurants and end consumers. Our new products are a reflection of their valuable input and we are excited to see how the changes take our brand to the next level as we grow our national presence,” says Yellow Rose founding partner and President Ryan Baird.

Founded in 2010, Yellow Rose Distilling debuted the first legal distillery and tasting room in the Houston city limits in late 2014. The 10,000-square-foot facility has become a destination for whiskey enthusiasts with twice weekly tours and a myriad of special events, plus a popular spot for locals and visitors from around the country and the world to sip and socialize over a menu of seasonally changing Yellow Rose craft cocktails. Featuring a 600-gallon mash ton, four 600-gallon fermenters, plus a 600-gallon whiskey still and vodka column, current production capabilities are over 20,000 cases per year. For information, call 281-886-8757 or log onto http://www.yellowrosedistilling.com.