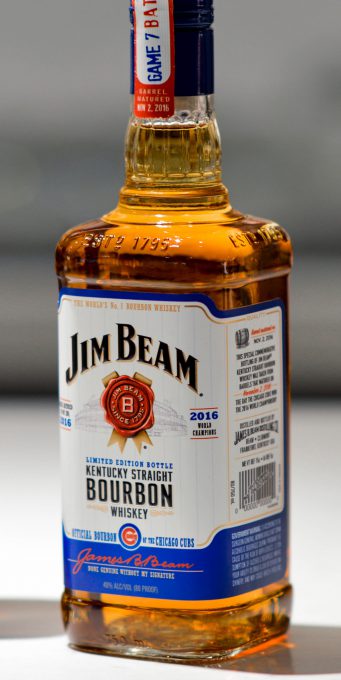 CHICAGO, IL (April 16, 2017) /PRNewswire/ — Kicking off their first season as Official Bourbon of the Chicago Cubs, Jim Beam® Bourbon is releasing Jim Beam® “Game 7 Batch,” a limited edition expression and commemorative label featuring bourbon that completed its 4 years of barrel maturation the history-making date of the Cubs’ Game 7 World Championship game last fall and set aside for release in the 2017 season.

To celebrate this first-ever release of a unique batch of Jim Beam’s 4-year Kentucky Straight Bourbon, global partner Mila Kunis visited Wrigley Field on Saturday, April 15, to throw out the game’s ceremonial first pitch before surprising bar goers with a preview of the product, which will be available in limited quantities at select Chicagoland retailers starting in June 2017.

Jim Beam® Bourbon brought Mila Kunis to The Cubby Bear and other iconic Wrigleyville bars on Saturday April 15, 2017 to surprise fans with a toast to the season and a preview of the new limited edition Jim Beam® “Game 7 Batch,” a hand selected batch of bourbon that completed its 4 years of barrel maturation the history making date of the Cubs’ Game 7 World Championship game last fall.Jim Beam® “Game 7 Batch”

With appearances at three of the neighborhood’s most iconic Wrigleyville bars, Kunis gave unsuspecting Cubs fans a sneak peek at the limited edition Jim Beam® “Game 7 Batch” bottle and toasted the crowd to another historic season. 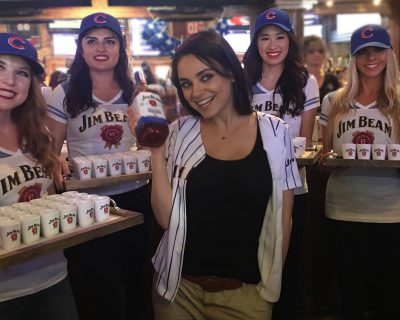 “We’re proud to call the Chicago Cubs part of our growing family, so in celebration of the Cubs’ history-making victory, we wanted to release a history-making bourbon for the occasion,” said Jim Beam’s 7th Generation Master Distiller Fred Noe. “This exclusive Jim Beam® ‘Game 7 Batch’ is our gift to the fans in Chicago from our home in Kentucky.”

“We love to see passion between our team and our Legacy Partners, and Jim Beam’s ‘Game 7 Batch’ is a perfect example of two historic brands coming together in the spirit of celebration,” said Chicago Cubs President of Baseball Operations, Crane Kenney.

Jim Beam “Game 7 Batch,” created with a hint of victory, is aged 4 years; however, this hand-selected batch features liquid that was completed its barrel maturation on the exact day the Cubs won the World Championship, delivering an oak vanilla aroma and a sweet finish that mirrors the ending of last year’s historic season. The product, packaged with a commemorative blue cap, batch sticker and specialty label to celebrate Cubs heritage, has a suggested retail price of $17.99 for 750mL and will be available for purchase in the Chicagoland area this June.

To learn more about Jim Beam’s “Game 7 Batch,” visit www.JimBeam.com, and keep up with Jim Beam news throughout the year on Twitter @JimBeam, Instagram @jimbeamofficial and Facebook at www.Facebook.com/JimBeam.

Beam Suntory was created in 2014 by combining the world leader in bourbon and the pioneer in Japanese whisky to form a new company with a deep heritage, passion for quality, innovative spirit and commitment to Growing for Good. Headquartered in Chicago, Illinois, Beam Suntory is a subsidiary of Suntory Holdings Limited of Japan. For more information on Beam Suntory, its brands, and its commitment to social responsibility, please visit www.beamsuntory.com and www.drinksmart.com.