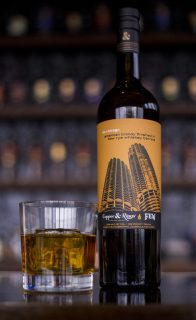 “Making good booze is like making great music,” says Copper & Kings founder Joe Heron. “It needs tempo and pace, it needs swing, and it needs the pure joy of a perfectly in sync rhythm section. Working with Paul Hletko and his FEW team is like adding Sly Dunbar and Robbie Shakespeare to the band. Big womp, big grooves and an infectious beat. We love the expansiveness of our collaborations, the opportunities to make American Brandy sing, and the joy of bringing out the best in each other. via chicago is an American Brandy that rocks with the abandon of great American Whiskey. Kind of like a road trip with the AM radio playing full blast or moving between stages at Kingston Mines.”

The ambition of via chicago is to marry the richness and silky power of American Brandy with the bold grace of American Rye Whiskey through the Rye Whiskey barrel maturation process. To combine the “spirit” of the distillates in a uniquely rambunctious way.

“We only work with people we like, and with people who share our values,” says FEW spirits president & distiller, Paul Hletko. “This is about friendship from both sides of the glass – those who make it, and those who drink it – and FEW and Copper & Kings are great friends. We will share quite a lot of this together. Most importantly the liquid needs to be superb, otherwise it’s not worth it, and this juice is dynamite. The integration of Brandy and the rye Whiskey notes from the barrels is tremendously exciting – big, bold, velvety power. It’s Whiskey masquerading as a Brandy.”

“This was great Brandy to start – a really lovely blend. The youngest spirit is over five years with most of it being a lot older – probably an average of eight years to be fair,” says Copper & Kings master distiller, Brandon O’Daniel. “A maturation cycle of two years is, well, more than just finishing and polishing the spirit – it’s about marrying profiles and letting the barrel magic happen completely and authentically. Rye’s quite a fruity, herbaceous, peppery Whiskey, and this, in combination with the dark fruit, honey and caramel of the Brandy, is just a marriage made in heaven. I love the spice notes, the robust power, the structure, but most of all I love that long, velvety finish. I really, really wish we had much more of this. It’s going to be gone too fast.”

“We were looking to illustrate Chicago barrels,” says Copper & Kings creative director and label designer Ron Jasin. “Marina City was an obvious, almost literal expression of the FEW Whiskey barrels, and they are very cool looking, and very iconic of Chicago.”

Available at the distillery, and through a limited number of select fine retailers in Chicago, New York City and Kentucky.

Copper & Kings American Brandy, Gin and Absinthe are double-distilled exclusively in copper pot stills, and are non-chill filtered, with no post-distillation infusion of boisé (oak flavor or infusion), other flavors, or caramel color for an uncorrupted, authentic, natural flavor, nose and color.