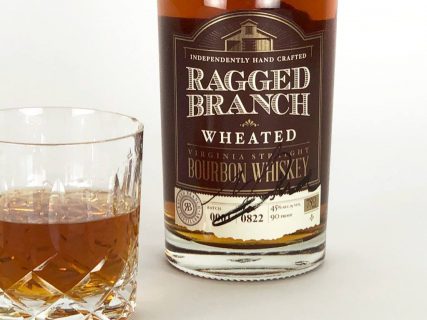 CHARLOTTESVILLE, Va. — Ragged Branch Distillery is releasing its much anticipated Wheated Straight Virginia Bourbon Whiskey with availability in its tasting room on September 1, 2018, and retail distribution beginning September 15, 2018. The smooth taste, flavor and aroma of the company’s new product is everything the makers had hoped for – and more.

“It has been tough to be patient waiting for our wheated bourbon to come of age, but now that we have it, it was so worth the wait,” said Alex Toomy, owner of Ragged Branch Distillery. “Once we sampled the final product, its authentic and mature taste was distinct, and we feel confident our customers are going to love it as much as we do.”

The new Ragged Branch Wheated Straight Virginia Bourbon will be available at select retail stores, bars and restaurants in Washington, D.C., Maryland, Delaware and Louisiana. It is also sold at over 100 Virginia ABC outlets across the state. The bourbon is 90 proof and sold in 750ml bottles that retail for $49.99 in Virginia.

The small batch wheated bourbon is a distinctly Virginia product. The Ragged Branch farm produces the raw ingredients used in the bourbon’s mash, which includes a mixture of 66 percent corn, 17 percent wheat and 17 percent malted barley.

“People tasting the new Ragged Branch Wheated Straight Virginia Bourbon are in for a really big treat,” said David Pickerell, the former Maker’s Mark master distiller who serves now in the same capacity for Ragged Branch. “Knowing Alex, the Ragged Branch team and the company’s commitment to excellence in every aspect of making this bourbon, I was confident it was going to be really good, but I think it’s better than good – it’s fantastic.”

The Ragged Branch Back Story

Born from an idea Toomy had with friends and now co-owners Russell Nance and Chris Sarpy during the financial downturn about ten years ago, the trio embarked on a journey to establish a distillery at a farm Toomy owned on Ragged Mountain in Central Virginia. After seeing Pickerell on a History Channel TV program about whiskey, Toomy took a chance and called the bourbon guru to see if he would be interested in helping Ragged Branch get its operations off the ground.

“David was unequivocal in wanting to be a part of our wild idea,” Toomy said. “He flew to Charlottesville to see the farm and ended up getting snowed in for four days. That gave us a lot of time to get to know each other and learn from one of the most knowledgeable people in the industry about every detail for making great tasting bourbon.”

After building a barn to house the distillery and constructing the actual still, and then navigating the permitting process – both federal and state, which included an unscheduled visit by Virginia ABC authorities that was amicably resolved – Ragged Branch began the bourbon making process in 2014.

In addition to committing to excellence in every aspect of the bourbon making process, Ragged Branch is an environmentally conscious business. The farm is the primary grower and producer of the bourbon’s ingredients, including all of the water used to make it. After its use, the bourbon mash is recycled by feeding it to the cattle on the farm, which gives the Black Angus beef a distinctive bourbon flavor that tastes great on its own and when paired with Ragged Branch bourbon.

“We farmed cattle before we ever had the idea to make bourbon, so this was really just a fortunate side effect that happened with our beef,” said Toomy. “Now we’re getting a reputation for the flavor of our beef as well.”

Visitors to the Ragged Branch Distillery can sample and purchase the brand’s bourbon and its beef. The tasting room has sweeping views of the Blue Ridge Mountains, and the Ragged Branch Bourbon Beef is available for sale, fresh or frozen, in a variety of cuts, including filets, ribeyes, sirloins, brisket and strip steaks, as well as ground beef. Half or whole butchered steers also can be purchased.

“Through the farm and new distillery we’ve created a special Virginia experience,” said co-owner Nance. “Our craft bourbon and our beef are made with ingredients farmed right here, and they offer a taste of the Commonwealth. We think people are going to latch onto what’s happening here and embrace it like we have.”