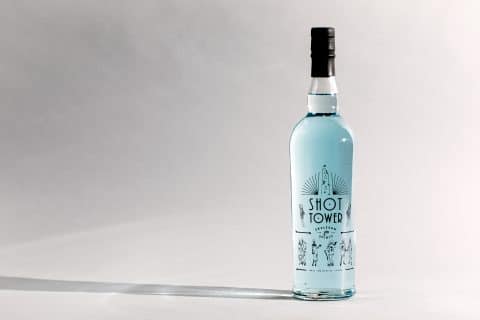 BALTIMORE, Md. — Baltimore Spirits Company today announced they will be releasing their first expansion of the Shot Tower Gin line since they began distillation in 2015. The new Shot Tower Skeleton Spirit Gin will be launched on November 1st, with a special Halloween dance party at their distillery in the Union Collective, and will be available in many Maryland liquor stores starting the same day.

The Skeleton Spirit Gin is only Baltimore Spirit Company’s second-ever botanical gin recipe and is made using juniper, eucalyptus, aloe vera, and 11 other secret ingredients. Its distinct light blue color makes it easily distinguishable from other gins and is meant to evoke an ethereal, otherworldly vibe reflected in its marketing and is a perfect addition to any liquor cabinet for the Halloween season. The flavor is described as intensely aromatic and cooling with a notably herbaceous finish.

To promote the release, Baltimore Spirits Company has debuted an animated video made by local production house Human Being Productions and voiced by Baltimore actress Danielle Robinette that tells an origin fable for Skeleton Spirit Gin: “A gift from the underworld to The World’s Most Adventurous Gin Drinkers.”

“We wouldn’t have considered releasing a new gin unless we were sure we had something really special on our hands,” said Baltimore Spirits Company co-founder and CEO Max Lents. “We wouldn’t want to compete with Shot Tower Gin, so it had to be something remarkable, and completely different on the gin spectrum. We think everyone will want both.”

Skeleton Spirit Gin is 90 proof/45% ABV and will retail for $32.99 a bottle. Baltimore Spirits Company has plans to make the gin available nationally starting next year.