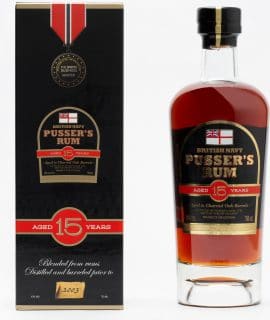 CHARLESTON, S.C.– There is an old adage that says it is hard to improve on perfection, but Pusser’s has proven it wrong with the rerelease of its iconic “Crown Jewel” 15-year-old spirit. The small-batch 15-year old, which Forbes Magazine has dubbed “the single malt of rum,” has been reformulated, repacked and available in limited supply.

“We decided to re-package the 15-year old blend for two reasons; first, the cost of the raw wooden pot still 15-year old component had increased significantly, and secondly, the column-stilled component of the Blend previously supplied by Trinidad Distillers was no longer available to us when they made the strategic decision to stop exporting their aged rum stocks,” said Pusser’s CEO Gary Rogalski. “We replaced this component with a similar rum from Guyana, which was again significantly more expensive. This required an increase in the consumer price on what is arguably the best rum in the world; so we thought it deserved a bottle, label and display box more in sync with its ‘Crown Jewel’ stature.”

Rogalski added that although the “chemistry” of the old and the new is exactly the same, the distillery’s sensory panelists, as well as most rum connoisseurs, have found the new to be a tad less sweet than the old, and therefore better.

The previous iteration of the 15-year old has won major, international awards including World Rum Awards “World’s Best Rum” and is considered by aficionados and connoisseurs as “the finest rum in the world.”

“Given the rarity of the 15-year old wooden pot still stocks, we were only able to produce 3,000 cases of this product for worldwide distribution (1,000 U.S.,1,000 UK and 1,000 for the rest of Europe), so it is exceptionally rare,” added Rogalski.  “We anticipate it will pick up where the previous 15-year old left off and take it to an even higher level.”

The reformulated and repackaged 15-year old is 100 percent rum with no artificial flavors or colors and is gluten-free. It is imported domestically by Shaw Ross International Importers, LLC.

Pusser’s Rum is produced in strict accordance with Admiralty blending specifications last used by the Royal Navy for issue to its fleet, a tradition which began in 1655 when it first served rum as its spirit of choice, with extra “tots” being offered before and after some of the most infamous battles in history. In massive wood pot stills, approaching 300 years old, Pusser’s continues to produce liquid history without the aid of flavoring agents and is 100 percent natural. Pusser’s Rum is highly decorated and has taken several Gold Medals in the highly acclaimed International Wine & Spirits Festival and the San Francisco World Spirits Competition. Pusser’s Rum Limited is a British Virgin Island Company with administrative offices in Charleston, South Carolina. Its products are imported into the United States by Shaw-Ross International Importers. For more information on Pusser’s Rum Ltd and its brands, please visit PussersRum.com.

Founded in 1968 as a wine and spirit importer representing a handful of brands, Shaw-Ross has grown into one of the nation’s leading importers representing leading suppliers from around the world. Shaw-Ross continues to evolve its portfolio to keep ahead of the ever-changing wine and spirits. For additional information go to shawross.com.