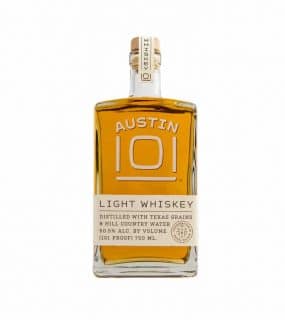 AUSTIN, Texas– Austin 101 Light Whiskey is now available in Austin, Texas. The uniquely elegant Austin-made whiskey includes notes of vanilla and butterscotch with a hint of savory nuttiness and a long, mellow finish. Impressively smooth at 101 proof, its unique light flavor profile is not only perfect for sipping, but adds punch, sophistication, and balance to cocktails.

Austin 101 Light Whiskey was created by three former tech pioneers driven by a passion to innovate. They set out with a vision to craft a whiskey unlike any other, for drinkers who don’t compromise on taste yet aren’t afraid to discover new ground. Its light yet powerful flavor profile was designed to be approachable and easily enjoyed by new and experienced whiskey drinkers alike. When tested, their mission rings true. Austin 101 was named runner up for the People’s Choice Award at the Texas Whiskey Festival where it debuted on March 7. The team’s proprietary small batch distillation methods also focus on sustainability, using 100% locally grown ingredients and high quality recycled whiskey barrels.

When asked about their inspiration for Austin 101 Light Whiskey, Austin Craft Spirits founders say, “It’s a decidedly unique take on a centuries-old art form, one that is as ambitious and inviting as the city for which it is named.”

Austin 101 Light Whiskey is 50.5% alcohol by volume and is available in 750 ml bottles with a manufacturers’ suggested retail price of $45. It is produced by Austin Craft Spirits Company and distributed by Republic National Distributing Company. It may be purchased at King Liquor, Austin Wine Merchant, Austin Shaker, Chris’s Liquor, and Davenport Wine and Spirits in Austin, with more independent and chain retailers coming soon.