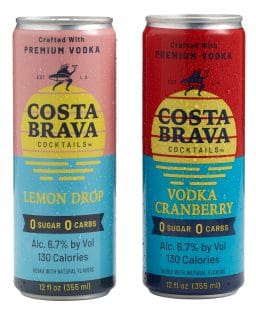 Costa Brava Cocktails offers cocktails in a vibrant 12 fluid ounce can that captures the spirit of Los Angeles’s  sun, surf and sand lifestyle. These drinks boast 6.7% alcohol, contain only 130 calories, and are gluten-free, without sacrificing the great taste, according to company co-founders  Matthew Kaplan and Ethan Lazar, both LA natives.

Costa Brava Cocktails is initially being self-distributed in Los Angeles. The cocktails are now available in select West Los Angeles liquor stores and on-premise locations, sold in convenient 4-packs and also  in individual cans at select on-premise locations. In the coming months, LazKap is planning a full Southern California rollout, which will be a runway for national expansion.

Costa Brava Cocktails was envisioned by the co-founders, who have had a brother-like bond since elementary school.  While studying together in Barcelona, Spain, they traveled to the nearby beach region of Costa Brava, and this vacation retreat became the inspiration for the brand’s namesake. The partners are recent business degree graduates of the University of Massachusetts Amherst.

Kaplan and Lazar are former high school baseball stars who have always shared a passion for physical fitness. As they reached adulthood, both became increasingly concerned about maintaining healthy living while still enjoying the social aspects of going out  with friends. Thus, Kaplan and Lazar became focused on the negative effect of sugar and carbs in alcoholic beverages.  The newly minted entrepreneurs said that this began their search for cocktails that would enable consumers to have it both ways– a drink that tasted great but did not have the usual ills of sugar and carbs that lead to weight gain.  Costa Brava Cocktails was the culmination of an extensive industry study as well as months of product development at the flavor house.