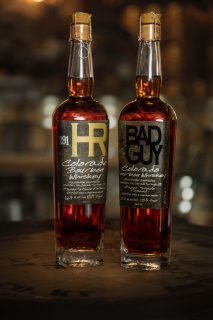 “These might be the perfect autumn whiskeys,” said Eric Jett, distiller at Distillery 291. “Both have a richness and spice similar to the treats and baked goods we enjoy this time of year – a fitting whiskey for the season we find ourselves in.”

291 Bad Guy Colorado Bourbon Whiskey Batch #6 is a wheated four-grain bourbon, made from corn, malted wheat, malted rye, beech-smoked barley mash, finished with 291’s traditional aspen staves. Historically one of the distillery’s highest-rated and most-awarded whiskeys, Batch #6 is presented at 125.5 proof for an MSRP of $104.99. Over 1,000 bottles have been made available for this year’s release.

291 High Rye (“HR”) Colorado Bourbon Whiskey is a complex bourbon that strikes a balance between the distillery’s Colorado Bourbon Whiskey and their Colorado Rye Whiskey, with spice and fruitiness to round out the vanilla and oak. Made from corn, malted rye, malted barley mash, and finished with aspen staves. Every batch of High Rye whiskey is presented at barrel proof and will retail for $104.99. 800 bottles will be made available.

“Our High Rye recipe was actually a complete mistake,” says Michael Myers, Distillery 291’s founding distiller and CEO. “A double dose of malted rye was accidentally added to our bourbon recipe one day and we thought we’d just let it ride. After aging a bit, the result was fantastic – it was a delicious, complex bourbon with notes of both spice and vanilla.”

Distillery 291 is a small batch whiskey distillery nestled in the stunning foothills of the Rocky Mountains. Located in Colorado Springs, the distillery sits in the shadow of Pikes Peak where founder and CEO, Michael Myers, aims to replicate the taste, smell and folklore of the Wild West.  Today, Distillery 291 is distilling, from grain to barrel to bottle, ten distinctive Colorado whiskeys. The young distillery has earned bushels of national and international awards for its spirits with the unique character and flavor of a bygone era, including the title of World’s Best Rye at the 2018 World Whiskies Awards. Distillery 291 embodies traditions of the past married with the boldness of the future: Rugged, Refined and Rebellious. Hardmade the Colorado way.