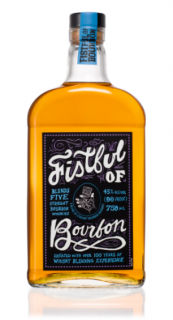 NEW YORK, NY — It’s a hot day in the wild, wild west. A cowboy interrupts a duel to slather sunscreen all over his face, while questioning the whole idea of scheduling shootouts at high noon. Another cowboy compares a bourbon’s smoothness to the silk loungewear he has taken to wearing. “It ain’t just a bourbon,” he says, “it’s a damn fistful.”

That smooth swig is Fistful of Bourbon, launched nationally by William Grant & Sons, the fiercely independent Scottish family distiller. Bringing over 100 years of blending expertise to the world of bourbon, Fistful is the first from-the-ground-up American whiskey from the award-winning portfolio. A blend of five straight bourbons –literally a fistful— Fistful is a one of kind whiskey delivering the best the category has to offer. A brand born from ingenuity, for its national launch Fistful of Bourbon created its own series of short brand films poking fun at cowboy movie clichés with writer and Saturday Night Live Movie Short Director Paul Briganti. Taking inspiration from Hollywood’s action packed Spaghetti Westerns, cult film classics and laugh out loud cowboy comedies, the Fistful of Bourbon world has been brought to life in these films and just in time for its coast to coast debut.

Known for his work on Saturday Night Live (NBC), Adam Ruins Everything (TruTV), and the Upright Citizens Brigade, Briganti worked with Fistful to create the series of shorts, giving consumers a glance into Fistful’s irreverent and hilarious world. The shorts star Frank Garcia-Hejl (writer, actor, director with Upright Citizens Brigade) and George Basil (a regular on HBO’s Crashing). To coincide with roll-out onto shelves and into saloons from east to west, the films launch across social media, streaming platforms and on FistfulofBourbon.com.

“Working with Fistful of Bourbon was so fun, it felt like making movies with friends,” said Briganti. “They have great taste in comedy, weren’t afraid to let me take creative risks, and they also make great bourbon, which has come in handy in 2020.”

“If you’ve ever found yourself daydreaming about who would win in a duel, Billy Crystal in City Slickers or Gene Wilder in Blazing Saddles, then Fistful of Bourbon is for you,” said National Brand Ambassador, Anthony Bohlinger. “There are many quirky characteristics that make Fistful what it is, from our blending process to our obsession with Hollywood and Western cult film culture. The trailer we created with Paul takes all of these things and wraps them in a wacky bow for viewer enjoyment.” While Fistful hopes to one day make a full length feature about just how damn good its bourbon is, for now 30 second clips accompanied by smooth, neat pours of whiskey will do just fine.

Originally launched in Texas in 2018, Fistful’s superior drinkability and playful personality caught on with bartenders and consumers alike priming the brand for its national launch in 2020. Fistful has been honored with a double gold medal in 2019 by the International Spirits Challenge, and most recently received a gold medal at 2020 San Francisco Spirits Awards.

Truly a full-fisted bourbon, the whiskey brings together five distinct flavors: balanced and sweet; green, leafy floral notes; soft spices and hints of nutmeg; buttery toffee; cinnamon and licorice. It’s blended and bottled at 45% ABV with an average SRP of $24.99 for 750ml and $1.99 for 50ml.

Fistful is available from September 2020 in on-and-off premise retailers and bars around America. For more information and to view the trailers, visitwww.fistfulofbourbon.com. Follow us on Facebook and Instagram @FistfulofBourbon, order us in bars, and buy us by the bottle in -store or online.

About Fistful of Bourbon

Fistful of Bourbon is a blend of five straight bourbons – literally a fistful – that together delivers the best that bourbon has to offer. 100 percent straight American whiskey blended by William Grant & Sons Master Blender Brian Kinsman, who was awarded the 2017 ISC Master Distiller of the Year, and Kelsey McKechnie, William Grant & Sons Whisk(e)y Blender, after sampling loads of straight bourbons from all over America. The whiskey has five distinct flavors: balanced and sweet, green, leafy floral notes, soft spices and hints of nutmeg, buttery toffee, cinnamon and licorice. Fistful launched in Texas in 2018 and is available nationally as of September 2020. It’s blended and bottled at 45% ABV with an SRP of $24.99 for 750ml and $1.99 for 50ml.

William Grant & Sons Holdings Ltd. is an independent family-owned distiller headquartered in the United Kingdom and founded by William Grant in 1887. Today, the global premium spirits company is run by the fifth generation of his family and distils some of the world’s leading brands of Scotch whisky, including the world’s most awarded single malt Glenfiddich®, The Balvenie® range of handcrafted single malts and the world’s third largest blended Scotch, Grant’s®, as well as other iconic spirits brands such as Hendrick’s® Gin, Sailor Jerry® Spiced Rum, Tullamore D.E.W.® Irish Whiskey, Monkey Shoulder® Blended Malt Scotch Whisky and Drambuie® Scotch Liqueur.

William Grant & Sons has been honored as “Distiller of the Year” by the prestigious International Wine & Spirit Competition and International Spirits Challenge 12 times over the past 13 years, including the most recent award in 2019. Founded in 1964, William Grant & Sons USA is a wholly-owned subsidiary of William Grant & Sons, Ltd. and features one of the fastest growing spirits portfolios in the US with brands including Glenfiddich, The Balvenie, Hendrick’s Gin, Sailor Jerry Spiced Rum, Tullamore D.E.W. Irish Whiskey, Drambuie, Milagro Tequila, Fistful of Bourbon, Grant’s, Hudson Whiskey, Gibson’s Finest, Monkey Shoulder, Clan MacGregor, Reyka Vodka, Solerno Blood Orange Liqueur, Flor de Caña Rum, The Knot and Raynal French Brandy. For more information on the company and its brands, please visit williamgrantusa.com.