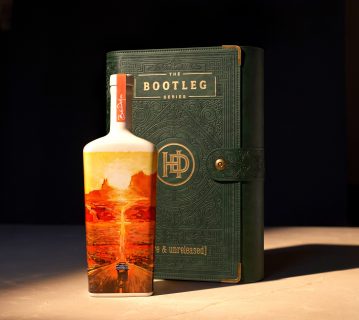 Named in tribute to Bob Dylan’s famed series of eponymous retrospective album collections, The Bootleg Series is a limited-edition collection of rare whiskeys and special blends. With fewer than 3,000 bottles offered, the 2019 inaugural release of The Bootleg Series (Vol I), received The Chairman’s Trophy and was named to the Top 100 Spirits at the Ultimate Spirits Challenge 2020 and sold out immediately upon release.

“The inaugural release of The Bootleg Series (Vol I) was a 26 year-old whiskey finished in Japanese Mizunara oak casks. It was a really special rare whiskey and set a high bar for future Bootleg releases,” said Marc Bushala, CEO of Heaven’s Door Spirits.

Heaven’s Door Master Blender, Ryan Perry, rose to the challenge. “After nearly two years of experimentation with different blends and barrel finishes, we have created an incredible whiskey for the Bootleg Series Vol II” Perry said. “I was intrigued by the idea of using Jamaican pot still rum casks to imbue the 15 year-old cask strength whiskey with a soft, round and lasting finish that is distinctive and complex.” After nearly a year in the rum barrels, the whiskey yielded “hints of maple syrup on the nose, notes of toasted coconut, holiday spice, and toasted oak on the finish,” said Perry.

In addition to his renowned music career, Bob Dylan is also an accomplished painter and sculptor. The New York Times critic Marisha Pessl wrote, “He is that rare person who can move effortlessly between music, word, ink, paint… he reflects life back to us with a truth and simplicity that defy words”. The painting that adorns Bootleg Series Vol II, Sunset, Monument Valley, was recently featured in Bob Dylan’s Retrospectrum at the Modern Art Museum in Shanghai, China, along with more than 250 of Bob Dylan’s artworks in an array of media.

With fewer than 3,000 bottles for sale at a suggested retail price of $499.99, Bootleg Series Vol II is now available for pre-order on ReserveBar.com, and will be available in select retailers in early November.

Rough And Rowdy Ways, released in June, is Bob Dylan’s first album of new songs since becoming the only songwriter to receive the Nobel Prize for Literature in 2016; an award bestowed upon him by the Swedish Academy “for having created new poetic expressions within the great American song tradition.” He has released seven studio albums within the past 23-years; a creative span that also included the recording of an Oscar- and Golden Globe-winning composition, “Things Have Changed,” from the film Wonder Boys, in 2001; a worldwide best-selling memoir, Chronicles Vol. 1, which spent 19 weeks on the New York Times Best Seller List, in 2004 and was recently named the greatest rock memoir of all time by Rolling Stone. He is the recipient of the Officier de la Legion d’honneur in 2013, Sweden’s Polar Music Award in 2000, a Doctorate from the University of St. Andrews in Scotland, and numerous other honors.