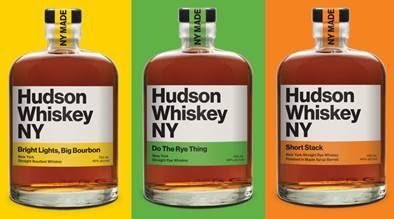 New York, NY – A pioneer of the American craft whiskey movement, Hudson Whiskey reaffirms its place as the spirit of New York with a bold reinvention. In the same way New York continues to evolve and grow, Hudson Whiskey now features more mature liquid with the same bold character, carried through in the taste, the look and the new names, all evoking the attitude that makes New York unlike any other place in the world. From the majestic views of the Hudson Valley to the bright lights of Broadway, Hudson Whiskey is a celebration of that spirit and the brilliant, creative and resilient people who call New York home. Beginning this month, the Hudson Whiskey portfolio proudly boasts Bright Lights, Big Bourbon and Do The Rye Thing, its reinvented flagship bourbon and rye offerings. Alongside these flagship variants, Hudson Whiskey has reimagined a perennial favorite, Maple Cask Rye, into Short Stack, a straight rye whiskey finished in maple syrup casks, and introduces Back Room Deal, a straight rye whiskey finished in peated Scotch barrels and the first innovation from the brand in seven years.

Hudson Whiskey started out like many New York stories, with a daring proposition, in this case, to make New York State’s first bourbon ever and to open the first distillery in the state since prohibition. The journey was not easy. In 2003, antiquated rules and regulations posed numerous challenges to a fledgling whiskey distiller, but founder Ralph Erenzo had a dream and the fortitude to make it a reality. By challenging the government to change the laws for craft distillers everywhere, Erenzo was at the forefront of the craft whiskey movement and put Hudson Whiskey, and more broadly New York whiskey, on the map. In fact, the barriers Hudson Whiskey broke down in the state led to five additional distilleries coming together with Hudson to establish a New York whiskey style to call their own, now classified as Empire Rye. Today, there are more than 1,800 craft distilleries in America and over 180 in New York State alone.

“Hudson Whiskey is the original innovator, a whiskey as bold as New York,” shared Paul Coffey, Senior Brand Manager, Hudson Whiskey. “Hudson shook things up when it started a movement here and now, once again, we will set the tone for what New York whiskey can be. That means liquid that has evolved with age, a fresh look to reflect our bold character, and reimagined names that evoke classic New York moments and that unmistakable New York spirit.”

At its start, Hudson Whiskey was the result of hard work and gumption. The brand quickly became an award-winning darling of the industry, due to its boldness and individuality. As the craft whiskey movement it pioneered continued to evolve, Hudson also matured, experimenting with new grains, blends, cask finishes and age statements.

Since 2017, the liquid has benefited from the distilling expertise of whisky icons Brian Kinsman, William Grant & Sons Master Blender, and David Stewart, The Balvenie Malt Master of over 55 years, alongside the Hudson Whiskey Chief Distiller Brendan O’Rourke. Together they have taken that 130 years of distilling pedigree for which William Grant & Sons is known and have applied it to Hudson.

“This is a seismic shift for the brand,” added Coffey. “With a significant increase in the age profile and the distilling dream team of Brian Kinsman, David Stewart and Brendan O’Rourke, we’ve been able to maintain the bold character of Hudson while mellowing the finish and softening the edges associated with younger whiskeys.”

The result is a reinvention of Baby Bourbon to Bright Lights, Big Bourbon and Manhattan Rye to Do The Rye Thing. As a yearly limited edition release, Maple Cask Rye is now Short Stack and an exciting innovation with a one-time release, Back Room Deal is a straight rye whiskey finished in peated Scotch barrels. With a bit of smoke and a bit of spice, it’s a liquid good enough to seal the deal. Now that time is on its side and with the expertise of its world class distilling team, Hudson Whiskey plans to experiment with older age statements to release additional innovations in the near future.

“My career began in the culinary arts after graduating from The Culinary Institute of America, so I value the fact that great products begin with great ingredients,” says Brendan O’Rourke, Chief Distiller and Operations Manager of Hudson Whiskey. “As a born and bred New Yorker, it is important to me to showcase the hard work from our local family farmers.  These grains form the backbone of Hudson Whiskey and we are proud to work alongside our neighbors as our brand continues to grow.  As the liquid inside of the bottle has evolved, it was fitting to update the packaging as well. The inspiration came from our love of the great state of New York and the people who make it unique.”

Ever evolving and always exciting, Hudson Whiskey captures the classic and dynamic essence of New York. The new packaging is inspired by the New York subway system with black and white blocking and bold, vibrant colors for each variant that convey a sense of place. The new variant names reflect New York attitude and embrace the kind of characters, places and moments that only exist in New York.

Hudson Whiskey will celebrate this rebirth by celebrating the people of New York and the New York sense of community.“New York is known for its people, the brave, resilient and creative individuals who make it home,” continued Coffey. “They are known for coming together to help and support one another. Hudson Whiskey is proud to celebrate that spirit and our fellow New Yorkers throughLifting Spirits, a month of uplifting activities to show support and appreciation to those who embody the New York spirit while also raising funds to help those in need.”

The Lifting Spirits program kicks off on September 14th with the auction of one select, limited-edition barrel of Hudson Whiskey that gives the highest bidder the opportunity to handpick a rare cask of their choice at the distillery. The barrel is being donated toDiversity in Wine and Spirits for this auction and all proceeds go to the organization. Diversity in Wine & Spirits is a non-profit working to advocate, promote and support diversity and inclusion in the hospitality industry; a mission Hudson Whiskey strongly stands behind. The auction goes live Tuesday, September 14th via CharityBuzz and will be open for three weeks, with bidding starting at $10,000. “New York is great because of its diversity and we want to keep it that way,” said Paul Coffey.

The reinvented Hudson Whiskey is available beginning this month in its home market of the tri-state area allowing New Yorkers to be the first to try before a national roll out in the coming months.For more information, including cocktails, distillery tours, Hudson Whiskey gear, and more, please visit HudsonWhiskey.com. Lifting Spirits activities will take place throughout September and October; follow @HudsonWhiskey to stay up-to-date.

Coffey concluded, “New York and the characters who call it home are always reinventing themselves and now so has Hudson Whiskey. We’ve never felt more at home.”

· Do The Rye Thing: We did it. New York’s first straight whiskey in nearly a century, in a style all our own. Bold and spicy, with notes of citrus and honey and a bright mint finish, Do The Rye Thing is as iconic as the classic New York slice.

· Short Stack: In the city that never sleeps, the diner is an institution. Short Stack is our toast to those late-night haunts, and the characters that inhabit them. Distilled from hearty New York rye, mellowed in American oak, then finished in Vermont maple syrup barrels. Bold rye spice rounded by a subtle maple sweetness: consider this our blue plate special.

· Back Room Deal:We send our ex-bourbon barrels across the Atlantic where they’re used to age peated whiskey, then emptied and returned to our distillery where we fill them up again with straight rye whiskey. There’s nothing sinister about it, it’s just how the world works. A bit of smoke, a bit of spice. Good enough to seal the deal.

As a pioneer of the American craft whiskey movement, Hudson Whiskey started out like many New York stories, with a daring proposition. In this case, to make New York’s first bourbon ever and to open the first distillery in the state since prohibition. Hudson Whiskey was invented with a rebellious mind-set to create a bold American whiskey unlike any other within the category, from a place unlike any other in the world, New York. From the majestic views of the Hudson Valley to the bright lights of Broadway, Hudson Whiskey is a celebration of New York spirit and the brilliant, creative and resilient people who call it home. The portfolio proudly boasts the reinvented Bright Lights, Big Bourbon and Do The Rye Thing (SRPs: $39.99 for 750ml; $24.99 for 375ml), its further matured bourbon and rye offerings. Alongside these flagship variants, Hudson Whiskey has reimagined a perennial favorite, Maple Cask Rye, into Short Stack (SRP: $54.99 for 750ml), a straight rye whiskey finished in maple syrup casks, and introduces Back Room Deal (SRP: $54.99 for 750ml), a straight rye whiskey finished in peated Scotch barrels. For more information, visitwww.HudsonWhiskey.com.

William Grant & Sons Holdings Ltd. is an independent family-owned distiller headquartered in the United Kingdom and founded by William Grant in 1887. Today, the global premium spirits company is run by the fifth generation of his family and distills some of the world’s leading brands of Scotch whisky, including the world’s most awarded single malt Glenfiddich®, The Balvenie® range of handcrafted single malts and the world’s third largest blended Scotch, Grant’s®, as well as other iconic spirits brands such as Hendrick’s® Gin, Sailor Jerry® Spiced Rum, Tullamore D.E.W.® Irish Whiskey, Monkey Shoulder®Blended Malt Scotch Whisky and Drambuie® Scotch Liqueur.

William Grant & Sons has been honored as “Distiller of the Year” by the prestigious International Wine & Spirit Competition and International Spirits Challenge 12 times over the past 13 years, including the most recent award in 2019.