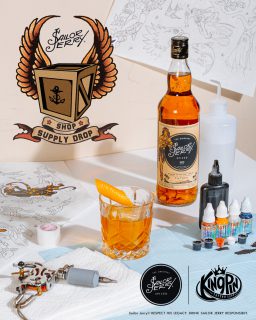 Sailor Jerry Spiced Rum announced the next installment of #SupportYourArtist, a global social media campaign aimed to help raise money and awareness for tattoo artists impacted by Covid-19. To honor Norman ‘Sailor Jerry’ Collins and the artists whose work speaks for itself, the brand is partnering with Kingpin Tattoo Supplies to give away a total of $30,000 worth of tattoo supplies to selected artists and studios around the world with ‘Shop Supply Drop’.

The eight-week long campaign is to be rolled out over social media until November, with nominees and winners being announced and voted for via the Sailor Jerry Instagram page. Winners will be selected through two routes:

1.) Via nominations from fans by tagging artists/studios in Sailor Jerry’s social posts (who will then be entered into a random drawing).

2.) Through submissions from artists via Direct Message to the Sailor Jerry Instagram channel. Six will be chosen at random and published on Instagram Stories for a public vote.

Each week, 2-3 winners will be chosen to receive their prize, with the final two weeks of the campaign seeing up to 10 winners chosen. Prizes will be in the form of $1,000 vouchers fulfilled directly with Kingpin Tattoo Supplies, with each artist being announced and promoted on the Sailor Jerry Instagram channel on their own carousel.

2020 has seen many tattoo artists and studios struggling in the face of the coronavirus pandemic. Global lockdown has forced many individuals and establishments to shut their doors to trade. The #SupportYourArtist campaign is a chance for Sailor Jerry to give back to a community that is an integral part of the brands history. “Sailor Jerry Spiced Rum originated from old school tattooing, and it’s at the heart of what Sailor Jerry is,” says Gemma Kane, Sailor Jerry Spiced Rum Global Brand & Culture Ambassador. “We want to be there to for the tattoo artists and shops that have always been there for us – as they continue to breathe life into Norman Collin’s flash on a daily basis – with #supportyourartist we strive to honor & support this community…”

In April, Sailor Jerry launched the ‘#SupportYourArtist social campaign by pre-purchasing original Sailor Jerry tattoos from 11 artists around the globe with the mission to put tattoo artists back to work.

The #SupportYourArtist, Shop Supply Drop campaign is part of an ongoing campaign that offers support to the arts industry during the Covid-19 pandemic. This latest installment will launch on @sailorjerry Instagram on the 1st October 2020 and running until 14th November 2020.

Sailor Jerry Spiced Rum is named after American born tattoo artist Norman Collins. Collins, whose nickname hails from the family mule Jerry and his affiliation to the US Navy, is the undisputed father of the old-school tattoo. He built his reputation tattooing in Hawaii’s brawling Hotel Street district of Honolulu, where sailors and soldiers came to raise hell before heading off to war. His infamous ‘flash’ tattoos are globally recognised and typically feature Hawaiian iconography. Sailor Jerry Spiced Rum is a straight-up, no nonsense, old-school rum. Back in the day, sailors used to smooth out their rum ration with spices, and Sailor Jerry Spiced Rum follows that same tradition. The result is a rum that is bold and smooth with hints of caramel and vanilla. A 80-Proof (40% ABV) Caribbean Rum blended with 100% natural spices and flavours.

William Grant & Sons Holdings Ltd is an independent family-owned distiller founded by William Grant in 1887. Today, the global premium spirits company is run by the fifth generation of his family and distils some of the world’s leading brands of Scotch whisky, including the world’s most awarded single malt Glenfiddich®, The Balvenie® range of handcrafted single malts and the world’s third largest blended Scotch, Grant’s®, as well as other iconic spirits brands such as Hendrick’s® Gin, Sailor Jerry® Spiced Rum, Tullamore D.E.W.® Irish Whiskey, Monkey Shoulder® triple malt whisky and Drambuie® Scotch Liqueur.