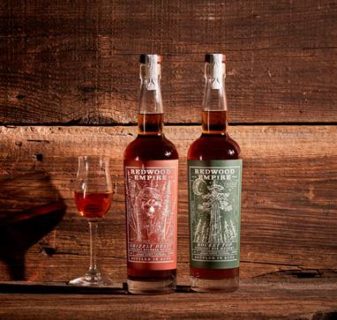 Both Rocket Top Rye and Grizzly Beast Bourbon were produced under the strict tenets of the Bottled-in-Bond Act of 1897 and distilled in the spring of 2016 at Redwood Empire’s West Sonoma County distillery by master distiller Jeff Duckhorn. Both whiskeys were aged for five years and bottled at 100 proof. Only 500 cases of each expression were produced. These limited offerings have a suggested retail price of $79.99/750 ml.

“We’re thrilled to introduce our first Bonded Bourbon (Grizzly Giant) and Rye (Rocket Top)” said founder and proprietor Derek Benham. “We started the Redwood Empire Whiskey project in 2011, first introducing our blended straight whiskey (Lost Monarch), then our Rye (Emerald Giant), and finally our Bourbon (Pipe Dream) in 2019. We are careful and patient with the way we make and age our whiskeys. The first release of our Redwood Empire Bonded Bourbon and Rye is ten years in the making, a testimony to the adage that many good things take time. We craft all our whiskeys with that in mind, hopefully providing a moment of pleasure for those who choose to have them in their lives.”

Redwood Empire controlled production from grain-to-glass for these two distinctive whiskeys. Duckhorn and his team delivered complexity and character through careful and thoughtful decisions from the selection of grains and unique mash bills to the significant cuts of heads and tails during distillation. The temperate weather conditions of Northern California allow a slow, even flavor extraction from the barrels throughout the year which imbues Redwood Empire whiskeys with their signature style.

“A Bottled in Bond-designated whiskey shares the most important information about its origins with whiskey lovers,” explains Master Distiller Jeff Duckhorn. “The ‘who’, the ‘what’, the ‘how old’ and the ‘where.’

These whiskeys are a time capsule back to 2016 and the culmination of our team’s hard work, patience and dedication. I am thrilled to finally get to share them with whiskey aficionados.”

Founded in 2011 by proprietor Derek Benham, Redwood Empire Whiskey is known for its collection of smooth, complex, and balanced whiskeys created by the team of master distiller Jeff Duckhorn and head distiller Lauren Patz. Located in the heart of Sonoma County, where ancient redwoods thrive, the cool climate delivers a consistent barrel extraction of flavor, producing exceptional whiskey.

In addition to the Bonded expressions, Redwood Empire also includes Pipe Dream Bourbon, Emerald Giant Rye, and Lost Monarch Blend of Straight Whiskeys. Each whiskey is named after an iconic tree from the Redwood Empire, which stretches from San Francisco north to the Oregon border. To ensure the health of tomorrow’s forests, Redwood Empire Whiskey has partnered with Trees for the Future, where a tree is planted for every bottle sole. More than 340,000 trees have been planted to date. Drink Among Giants.