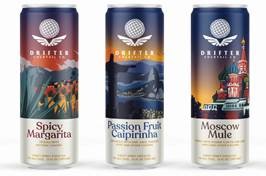 NEW YORK, N.Y. — Drifter Craft Cocktails is debuting with a new canned cocktail collection that offers the opportunity to discover global spirits and tells the story of passionate small-batch producers. Inspired by adventures and alluring faraway places, Drifter Craft Cocktails were created in collaboration with leading bartenders and are available in three varieties: Spicy Margarita, Passion Fruit Caipirinha, and Moscow Mule (7% ABV; SRP $19.99 for a 4-pack) through select retailers and online beginning June.

Drifter Craft Cocktails is co-founded by Pete Nevenglosky, Nate Whitehouse, and Jeff Diego who are the team behind Drifter Spirits, the company that brought Avuá Cachaça and Svöl Aquavit to the United States. Drifter Craft Cocktails is the continuation of their mission to give underrepresented spirits and distillers a platform – this time, in a convenient ready-to-drink (RTD) format that meets the ever-growing consumer demand for premium RTDs. Formulated by some of the country’s top bartenders, Nico de Soto (Mace, New York and Danico, Paris), Mariena Mercer Boarini (Wynn, Las Vegas), and Michael Neff (The Cottonmouth Club, Los Angeles), each recipe highlights centuries-old spirits and brings cultural drink traditions to the forefront.

Nico de Soto, the globe-trotting bartender who can be found tending bar or DJing in Paris, New York, or Dubai, created an ode to wanderlust with the Spicy Margarita. De Soto, sampled notes from Pueblan mole, the spiciness of Guadalajara, and the tropical paradise of the Yucatán to evoke a journey through Mexico and its culinary variety.

Mariena Mercer Boarini, an anchor of the Las Vegas resorts bar world, was inspired by the warmth and passion of Brazilian cuisine as well as the romance of cachaça and its classic cocktail application, the Caipirinha. For the Passion Fruit Caipirinha, Boarini focused on the lushness and hogo (funkiness) of Avuá Cachaça, while balancing it with the brightness of passion fruit and spices. The result is a cocktail that reflects her desert home and expertise in alchemy.

In addition, Michael J. Neff who has helmed bar projects across the country for the last two decades, brings a delicious balance of yin and yang to the Moscow Mule. Attracted to extremes, Neff combined the sharp spiciness of ginger beer with the grassy sweetness of Griffo Pot Distilled Vodka produced in California. The drink pays homage to the American cocktail developed at the Chatham Hotel in Midtown Manhattan in the 1940s that has remained popular the world over.

More information on individual cans and source of the ingredients below:

“Drifter Craft Cocktails uses high-quality ingredients and is transparent on where we source every element,” says Nevenglosky. “From Vietnam, to India, to the Philippines, the ingredients are shared on every can with a story about the producers. We are proud to highlight Avuá Cachaça, produced by third-generation master distiller Katia Espirito Santo in the hills four hours from Rio de Janeiro; Paladar Tequila produced by the Orendain family, who have made tequila since 1844 and are the last of the independent founding families of tequila; and Griffo Pot Distilled Vodka produced in Petaluma, CA showcasing the beauty and bounty of Sonoma County. Wherever you roam, we hope Drifter Craft Cocktails are along for the ride and inspire the discovery of new flavors.”

The Drifter Craft Cocktail packaging and artwork are reminiscent of air travel in the 1950s and 1960s when Boeing 747s and Pan Am soared through the sky.

CEO of a Brewery in SW USA - Southwest based br...