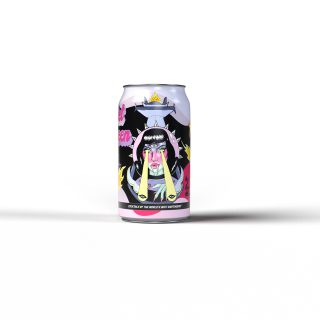 “Rum and tropical drinks are too often expected to be overly sweet and juicy,” says Erin, currently Partner and Director of Sales & Trade Advocacy for Portland, OR-based Westward Whiskey. “Rocket Queen turns that notion on its head with the balance of citrus, spice and complexity. I’m excited to convert people who might typically go for classics like a Moscow Mule or a Paloma into rum fans with this cocktail!”

Created in Los Angeles and produced in Ventura, CA, LiveWire Cocktail Co. was founded in September 2019 by renowned LA bartender Aaron Polsky, who lives and breathes rock ‘n’ roll and the art of drink making. He works with the world’s best bartenders to create exceptional canned cocktails using the best ingredients. Prior releases include Polsky’s own Heartbreaker and Golden God, and Honeydew Collins by Harvard and Stone’s Joey Bernardo.

Rocket Queen is the first rum drink in LiveWire’s canned lineup, and features Magdalena Rum, produced in Guatemala in partnership with Westward Whiskey Distillery in Portland, OR. It’s a riff on a Jet Pilot, one of Erin’s favorite drinks within the tropical drink cannon. Erin’s affinity for tropical drinks grew during her five years helming the bar at Three Dots and a Dash and then Lost Lake, Shelby Allison and Paul McGee’s internationally acclaimed bars. It was the beginning of a hugely rewarding working relationship and personal friendship that continues to this day. In fact, Erin co-wrote the menus at Lost Lake through 2019, including the year the bar won “Best American Cocktail Bar” from Tales of the Cocktail (2018).

The tropical theme is also woven into Rocket Queen’s can art, a freaky, goth aesthetic that has been Erin’s omnipresent style trait for a while now. Chicago artist Corinne Halbert’s creepy-cool art empowers women, sex, and body positivity. “My love for the macabre drew me to Corinne’s art the first time I saw it,” says Erin. “I am a goth girl at heart, after all. Her creepy, horror driven, sex positive, femme forward work is among my favorite of contemporary artists. It’s dark, but also super fun!”

Born and raised in a working-class family on the west side of Chicago, Erin learned how to hustle hard and early, working at 13 as the neighborhood babysitter, and by 15 at her local bakery (stealing pastries at the end of the night to distribute to her friends, or as she puts it: “I was the Robin Hood of danishes and donuts.” At 19, she spent a winter semester in Florida as part of the Disney Hospitality Scholarship program, where she perfected her Piña Colada at The Outer Rim. This turned out to be very fitting, as years later, tropical drinks have underscored some of Erin’s most significant achievements and passions.

Years later, after stints at TGI Fridays and local pubs and dives, which included everything from breaking up bar fights with her aptly-named baseball bat “The Enforcer,” to dealing with the occasional bathroom overdose, to day-to-day bar management, Erin’s path crossed with globally-acclaimed operators Shelby Allison and Paul McGee. This marked the beginning of a hugely rewarding five-year working and personal relationship that continues to this day. On her partnerships, Erin says, “I have, over the course of the last seven years, made very thoughtful decisions about who I work for and what kind of company I keep. I always want to align with companies that hold my shared values, which is very much the case with Paul & Shelby, Westward Whiskey, and LiveWire.”

Today, Erin is Partner and Director of Sales & Trade Advocacy for Portland, OR-based Westward Whiskey as well as co-founder, alongside internationally-acclaimed bartender Kelsey Ramage, of the upcoming Black Lagoon, a creepy, traveling, metal Halloween pop-up. Her take-no-bullshit attitude and radical adherence to equity-for-all are expressed unapologetically, and consistently guide her personal and professional decisions. “Creating a safe and comfortable space for most means creating an uncomfortable space for a few,” she says. About her intended legacy, Erin remains steadfast in her commitment to empowerment and social change: “I want people in this industry—in all positions, all places, all facets—to know that they can have a platform and that they can use the platform for positive change that they believe in.”

Created by renowned LA bartender Aaron Polsky, LiveWire Cocktail Co. is all about the people, putting the creators of these delicious drinks front and center by making their involvement more than just a recipe, but also the image of the brand and the benefactors of their sales. If bartenders are the new rock stars, then LiveWire is a new record label. Polsky is working with the world’s best bartenders to create exceptional canned cocktails using the best ingredients. Read more about the brand at New York Magazine, Los Angeles Magazine, The Daily Beast, Punch, Wine Enthusiast, KCRW, Eater, Golden State, Alcohol Professor, and Guilty Eats.