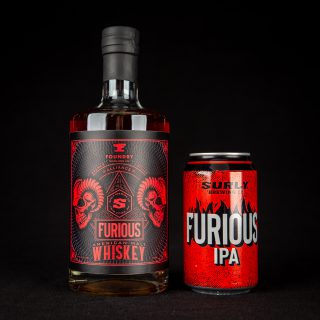 West Des Moines, IA – What do you get when a brewery that doesn’t settle teams up with a distillery that’s driven to create exceptional spirits, and they make a whiskey out of a renowned beer? The answer: something truly remarkable. Foundry Distilling Co. and Surly Brewing Co. have collaborated to create Furious Whiskey, distilled from the wort of Surly’s Furious IPA beer. This whiskey will be released on July 10th, 2021.

“This has been a fantastic collaboration with our Midwestern neighbor, Surly Brewing Company,” said Scott Bush, owner of Foundry Distilling Company. “We know whiskey enthusiasts will love this take on their iconic, hoppy, and aggressive Furious IPA.”

Surly’s Furious IPA’s aggressively in-your-face hoppy and citrusy nature has been distilled into an American single malt whiskey with every ounce of zesty citrus sweetness as its beer counterpart. Surly brought the beer’s wort to Foundry Distilling Co., where it was fermented, distilled, and aged for 24 months in new 30-gallon charred American Oak barrels to produce the whiskey. In total, Foundry has made 1,000 cases in a limited run that pushes the envelope of what makes a spirit unique.

Foundry Distilling Co. is hosting a launch party at their distillery in Historic Valley Junction, Iowa, on Saturday, July 10th, from 11 a.m. to 2 p.m. to celebrate the Furious Whiskey release. This event is open to the public, and the first 100 attendees will get a complimentary branded rocks glass. At the event, people can sample Furious Whiskey and Furious IPA while meeting with Foundry Distilling Co.’s head distiller Greg Biagi and Surly Brewing Founder Omar Ansari.

Those looking to secure a bottle of this one-of-a-kind whiskey before the launch date can do so by pre-ordering online on the Foundry Distilling Co.’s website. People that have pre-ordered will have two weeks from the release date to claim their bottle.

This collaboration with Surly Brewing Co. was made possible through Foundry Distilling Co.’s Brewer-Distiller Alliance initiative, which aims to work with outstanding breweries across the nation to produce remarkable, distinctive whiskeys from their beer recipes. The breweries produce the wort using their recipes, and Foundry then ferments, distills, and barrel ages the spirit to create whiskey. Foundry Distilling Company and its partners have generated a diverse collection of exclusive limited-edition whiskeys.

Foundry is also working with Surly on another special whiskey, based on the brewery’s Axe Man IPA, that is scheduled to be released during the 3rd quarter of 2022.

It’s Surly’s mission to deliver true flavor, an irreverent attitude, must-have beers, and world-class experiences to its fans. From their 2004 start in a converted abrasives factory in Brooklyn Center, Minnesota, Surly has grown into one of the premier destination breweries in the country. Along the way, they have earned countless medals from the Great American Beer Festival and the honor of being awarded the Best Brewery in America. Surly is known for bold and uncompromising beers that don’t adhere to strict style guidelines such as Furious IPA, Grapefruit Supreme, Axe Man IPA, Abrasive Double IPA, and Darkness Russian Imperial Stout. Often polarizing, but never compromising, Surly knows their beers aren’t for everyone. They’re for you. You do enough settling in life. Don’t settle. Get Surly.

Foundry Distilling Co. strives to be one of the most innovative distilleries in the world by providing unique products, offering once-in-a-lifetime experiences, like our Private Barrel Club, and collaborating with an alliance of nationally recognized breweries, known as the Brewer-Distiller Alliance. Their flagship product, The Real Stuff is made from a mash of grain and cane and aged in charred oak kegs and is an attempt to recreate the actual process used to make the legendary “Off-the-Farm” spirit of rural Iowa farmers.