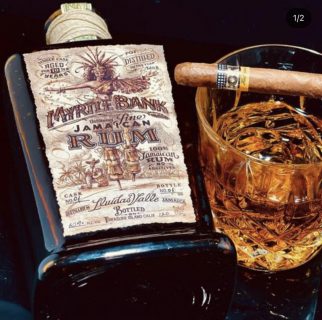 Jamaica’s Worthy Park Estate has emerged as a power player in the current Rum Renaissance, proving to be one of the most consistent and readily available producers in the ever-growing field of pure, high quality, pot-still rum. This is particularly impressive considering the distillery was completely out of commission from the early 1960s until 2005, when it underwent a complete overhaul and began distilling again, seemingly predicting the future rise of rum among spirits aficionados. Soon they were releasing traditional, overproof, unaged rum under their own Rum-Bar label, barreling rum for aged releases, and selling rum in bulk to the European market. We’ve seen some fantastic independent bottlings over the last few years, utilizing the European stock, generally just a few years old. We are excited to share some new and well-aged Worthy Park gems in the form of Myrtle Bank 10 Year (an independent bottling, aged in Europe), and Worthy Park Estate 2006 12 Year (Worthy Park’s own label, aged in Jamaica, distilled the year after operations recommenced.)

Both of these pot-still dynamos are completely unadulterated, bottled at cask strength, and show the estate’s rum at the height of it’s power, but in very different ways. Like all Jamaican distilleries, Worthy Park utilizes a number of different “rum marques”, recipes that produce varying levels of funkiness, or more officially, containing different amounts of esters, measured in grams per hectoliter (or g/hL AA). This is achieved through the use of different proprietary yeasts during fermentation, as well as varying the lengths of fermentation, from just a few days to several weeks. These two special bottles show two of the most important Worthy Park marques: Worthy Park Light with 60-119 g/hL AA in the Worthy Park 2006 release, and Worthy Park Extra with a whopping 360-800 g/hL AA in the Myrtle Bank 10 Year.

On top of the huge funk differential, the difference between continental and tropical aging create massively different end results. Worthy Park Estate’s 12 years of tropical aging lends it a deep, rich profile that could be compared with continental aged spirits nearly three times its age. That intense concentration of flavor along with the lighter ester count create a more spice and oak-driven rum than many have come to associate with Pot Still Jamaicans. Those big fruit flavors (especially banana) are still there in a way you’ll never see with column still or even blended rums, but they mingle with oak tannins, vanilla, and tingly spice in a surprisingly elegant way. Myrtle Bank 10 Year, on the other hand, is loud and proud, with explosive fruit hogo in the foreground. The aging has lent complexity, yet the wood is a backup singer to the familiar flavors of that beautiful WP distillate. This is the kind of rum whose pungent nose will turn heads upon being poured into a glass.

Either way, it seems we are only just now entering this glorious golden age of rum, and Worthy Park has emerged as one of the reigning noble houses of the era.